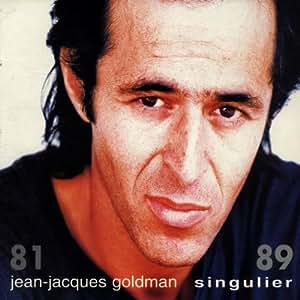 Unlike Francis Cabrel or Patrick Bruel the artist Jean-Jacques Goldman didn’t have a signature album that sold over 2 million units. That may be why he isn’t the first one we think about when referring to monster sellers. Success-wise yet he crushes everyone.

After an incredible successful 80s decade that saw his last four albums sell a million, an early 90s trio hiatus with Carole Fredericks / Michael Jones with 2 out of 2 million sellers plus works as songwriter including the bestselling album ever D’Eux for Celine Dion, it was time for Jean-Jacques Goldman to release a first compilation. Surprisingly, that one covered only his solo 81-89 years. He released so many cult songs in that span of years that it wasn’t a limitation for this package.

Released in August 1996, the timing was spot on as Worlds Apart cover of his Je Te Donne song was Top 5 in the singles chart. Predictably, Singulier dominated the compilation chart. Despite strong competition from Florent Pagny and his million selling Bienvenu Chez Moi best of, Goldman package spent the 20 weeks from its release to the end of the year inside the Top 3, including 13 at #1. Sticking within’ the Top 25 for most of 1997, the album reached a million sales by January 1998, one of the fastest selling compilation ever.

As one may expect, the album also became a catalog chart favorite. Since 2000, it appeared on rankings (compilation until 2010 / main chart from 2011) every single year.

Keep checking upcoming articles to see if this is the best selling compilation album ever in France as it definitely is part of the debate.