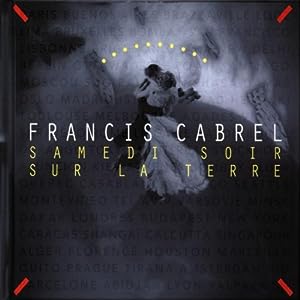 If the period 1997-2002 saw many albums reach blockbuster status, in the first half of the 90s much less albums got really big, but they did it in an incredible fashion. First Patrick Bruel in 1990 with Alors Regarde, second Francis Cabrel in 1994 with Samedi Soir Sur La Terre, third Celine Dion in 1995 with D’Eux.

The career path of Francis Cabrel has been pretty unusual. He was big from his first 1977 album thanks to the hit single Petite Marie. From that year to 1985, he released six albums, all selling 500,000 units give or take. Big, but not that big.

Then came Sarcabane 1989 that gave the artist a new dimension by selling over 1 million units within’ a few months. It was the start of the second chapter of his career, the one with record breaking sales where most of his albums constantly ended as the very top seller of its year of release.

Samedi Soir Sur La Terre, released in April 1994, was the follow up of this album. Question was obviously if Sarbacane was a one-time success or if he was going to be able to repeat that smash. He did more than that, dropping the biggest album of all-time up to that point chart-wise.

The album easily entered at #1, dethroning Pink Floyd album The Division Bell. It had no counterpart in the Singles chart as out of the five songs used to promote the record, only one got a physical 2CD release. All of them yet – La Cabane Du Pêcheur, Je T’Aimais Je T’Aime et Je T’Aimerais, October, Samedi Soir Sur La Terre and the #7 hit La Corrida – became immensely popular.

This success translated into the album. Despite getting passed for a week by new Michel Sardou album on its third week, it quickly came back to the throne to keep it during an impressive 17 weeks in a row until end of August. In September the album was already well over the Diamond mark, having sold 1,2 million copies.

Big releases from September to November pushed the album down even if it still managed to add four more weeks at the top during that span. By that time, sales were on 1,6 million copies in France, a total not seen within’ a calendar year since Michael Jackson‘s Thriller in 1983.

More importantly, Christmas rush show the album reclaim firmly the #1 spot thanks to La Corrida smash. In total, Samedi Soir Sur La Terre led the album chart for 26 weeks in 1994, exactly half of the year and 67% of the weeks after its release.

During the first quarter of 1995, before France moved to Celine Dion‘s D’Eux, the album continued its run in the Top 5. It spend more than a year on it from release, topping 2 million sales in that period.

If sales during the first year were incredible, so were catalog sales of the album. By February 1996, while the album was still charting at an incredible #12 position after almost two years, Cabrel had convinced 2,6 million French consumers plus 500,000 foreigners.

After being #1 seller of 1994 and #4 of 1995, there was nothing stopping the phenomenon as the album was the 30th album of 1996, adding 250,000 more units to conclude it at 2,8 million. It dropped from the Top 50 for the very first time an unreal 31 months after the original release. That was barely due to Christmas competition as that cult set returned various more months in each 1997, 1998 and 1999. In that year, the album reached a very closed club that only has three members up to now: the one of 3-million selling albums.

All in all, Samedi Soir Sur La Terre had 29 weeks at #1, 70 weeks Top 10, 135 weeks Top 40, numbers speak by themselves. This soft-rock feel good record that may be considered as some kind of French Rumours, the absolute Fleetwood Mac album, is often regarded as the greatest French album ever.

Although an utterly incredible seller, the 4 million plus sales ‘estimated’ by infodisc website are completely ludicrous.

Let’s go Back.It IS said that Gabrel is French Bob Dylan. He made an album of Dylan’s songs and rose No.1 on France. 2 x platinum. Before that, Gabrel made some covers for
Dylan.
But The actual French Dylan IS Hugues Aufray, well worth a look at both.