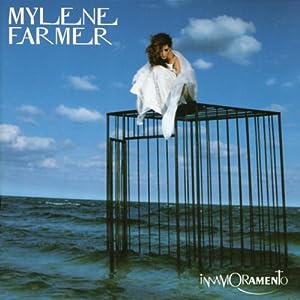 One of the most recognizable figure in French music scene, Mylène Farmer was in front of a difficult exercise in 1999. Indeed, meeting expectations after three consecutive million selling studio albums is still a complicated target even for such a successful artist. Innamoramento did manage to reach the coveted million plateau establishing even more the widespread appeal of the discrete singer.

This ultimate success doesn’t mean it was an easy feat yet. In fact, the era even started with some kind of an upset when the album failed to top charts on release, being blocked at #2 by Francis Cabrel monster album Hors Saison despite this one being on its second week.

Following weeks weren’t that good either as Innamoramento got time to leave the Top 10 while Cabrel album was still sitting at #1.

Singles weren’t doing incredibly well too. Each of the previous million selling albums had a #1 single, none from Innamoramento reached the top spot. The five Top 10 singles it still amassed only cumulated 9 weeks inside the top tier, illustrating the fact her chart peaks were much more fans-weighted than really large successes.

Each single did its hard work in supporting the album yet and while not being at the very top, the set spent most of 1999 inside the Top 15. In 2000, as singles continued to drop, the album kept going decently, leaving the Top 50 only two weeks until October.

Sales-wise, the album was certified 2xPlatinum late in 1999 – shipments were around 750,000 units already yet. This enabled a 3xPlatinum certification in 2000 and a Diamond award in March 2001, when a mid-price campaign sent the album all the way up from outside the Top 150 to #8 during a couple of weeks.

At 1,08 million by the end of the 2001 year, the album failed to gain traction as a catalog record. Despite entering sparsely catalog charts, each time it was due to a fan-dedicated new edition. During 14 years, from 2002 to 2015 included, the album only scanned 59,000 copies as per GFK.