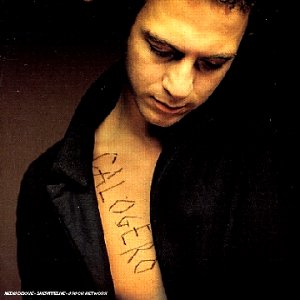 After a debut solo album that failed to reach the Top 50 and an entire career with his former band The Charts, expectations weren’t high for Calogero 2002 album titled simply Calogero.

Lead single Aussi Libre Que Moi started gaining higher rotation than anything he ever released, enabling the album to enter straight at #10, a huge result for the singer. Breakthrough wasn’t completed yet as on its 8th week Calogero was already down to #98 and it was still not back into the Top 50 on its 20th week despite holding quite nicely lower on charts.

Second single started slow as well, entering at #36, although that was still quite decent for the artist. En Apesanteur ultimately gained traction, ending as a pretty classic song as of today. The song peaked at 13 and pushed the album as high as #16. Following singles continued the hard work. A real hard work – in week 75 Calogero went up from 20 to 8, re-entering for the very first time in the top tier singles its debut week.

One of the most atypical chart runs ever, the album peaked for good on week 97 at #3, ironically a mere 7 weeks before being excluded from charts because of the 2-year limit, showing how absurd this rule was.

Certifications-wise, the album was just as atypical. Despite the artist growing status and first 100k-selling album, his label hasn’t consider worth it to certify the record with a Gold award. It passed required sales of 2xGold, Platinum, 2xPlatinum, 3xPlatinum award regularly over a two years span but it took until the Diamond award to get his label, Universal, finally certify the album, in June 28 of 2004. As it wasn’t strange enough,  the album then went 2xGold in November 11 of 2004, while after Diamond award in France certifications are closed.

What’s pretty interesting is the fact this 2xGold award was attributed for the artist “Total Operation” of “Calogero” album by “Universal Music Special Product” major. In fact, this was actually the direct-to-consumer service of the major, usually selling low-profile albums, that used the huge ride Calogero was enjoying with his 3 album to sell one more bunch of Calogero copies, months after its chart exclusion.

Its catalog chart run from the time is very interesting:

As one may guess, the album didn’t stop selling from #1 to out of the top 40 the two times it suddenly disappeared. It got excluded very precisely because of the budget edition.

If we follow year end charts, we get total sales around 950,000 until the end of 2004 as per IFOP methods. As we know such French releases were downgraded by about 30% of the time, it is consistent with the cumulative amount of both awards. It was still going strong in late 2004, with estimates by the end of that year of 1,25 million copies shipped. Due to both traps, misleading IFOP panel and direct-to-consumer release, sales of this album have systematically been downgraded on all websites assuming some figure for it. Then, it sold as follow: