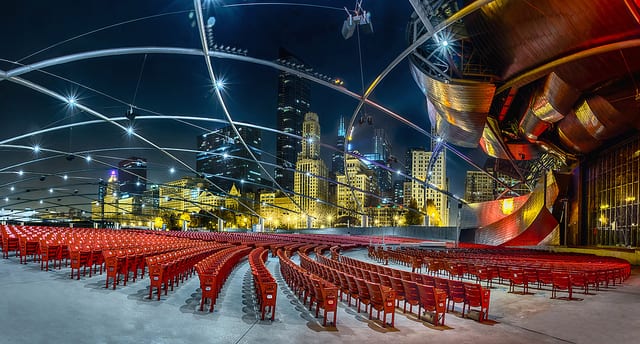 Take your seat, it’s time to enter the new millennium to review the most streamed albums from 2000. There is plenty of solid candidates to make this top 10. This year included strong releases from Eminem, Coldplay, Britney Spears, Madonna, NSYNC, Linkin Park, U2, Enya, the Backstreet Boys, Nelly, Bon Jovi, and many more. Who’s seeing the strongest ongoing appeal among all them?

No Strings Attached was NSYNC‘s second album and their attempt at breaking free from their saccharine soaked first album & image, after managing to break free of their management…the title and cover, are both a play on this.

It is the bands best selling album, having been certified 6 times Platinum by the RIAA and  selling 5,653,000 copies through Soundscan, as of 2014.

The majority of the albums 323m streams, come from the lead single Kryptonite, which provides a very healthy 274m of them. The rest of the album comes nowhere near that, only Be Like That 20.1m and Loser 11.2m are over 10m, the other 8 tracks all under 4m, only providing a paltry 15.3m. 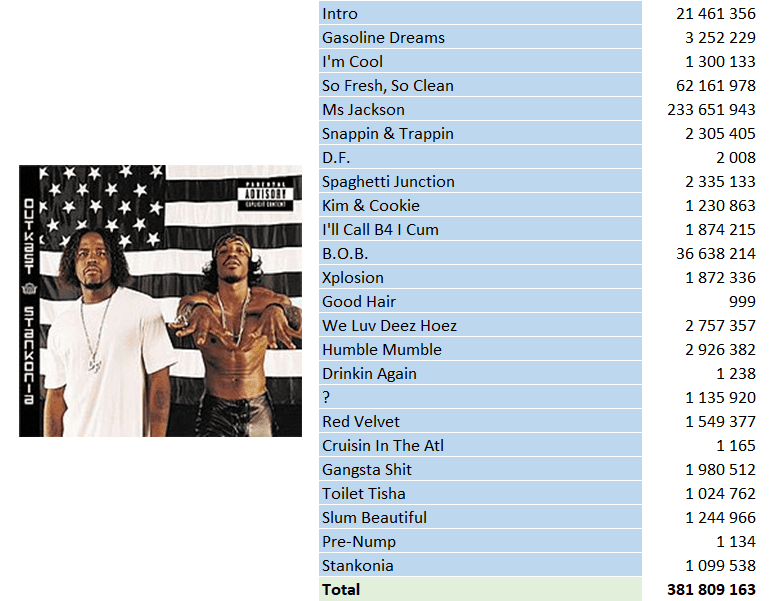 Outkast‘s 4th album Stankonia, is their second biggest seller, behind 5th album Speakerboxxx/The Love Below. It debuted in the US at #2, selling over 530,000 copies in its first week. It is currently RIAA certified 4 times Platinum and had sold 4,025,000 through Soundscan, as of 2007.

On Spotify the album gets a mixed reception. Its top track and 2nd single Ms Jackson does admirably with 234m streams, as do 3rd single So Fresh, So Clean 62.1m, 1st single B.O.B. 36.7m and album track Intro 21.4m but the rest of the album is pretty much ignored, with none of the other 20 track/skits over 3.2m individually.

Perhaps the biggest surprise from 2000, is the huge popularity of the albums first single, Last Resort. It comes in with a whopping 342m streams, a total only bested by Coldplay and Linkin Park in 2000. While only reaching #57 in the US, it went top 5 in the UK #3, Germany #5 and Austria #7. Gaining a 2 times Platinum award in the UK for over 600,000 shipments and Platinum in Germany for over 500,000.

The rest of the album obviously isn’t as strong as Last Resort, but Between Angles and Insects 21.8m, Blood Brothers 14.6m, Broken Home 9.9m and Dead Call 7.6m all post good numbers. The other 8 tracks are all under 3.8m and account for an additional 13.6m.

The Sickness is the debut album from US Heavy Metal act Disturbed. It is their only album not to go top 5 in the US, peaking at a relatively lowly #29. Relatively, as their next 5 studio albums all went to #1 and their 7th, 2018s Evolution went to #4. To date the albums has shipped over 5m copies in the US, which despite its low chart placing, is their biggest selling album.

It is the first album in the list, that has a strength and depth to it, no track is below 5.4m and 6 are over 10m. Leading the way is 2nd single Down With The Sickness with 232.6m streams. While no other track can contend with that, 1st single Stupify 43.6m, 4th single The Game 30.4m and 3rd single Voices 21.5m, all perform well. 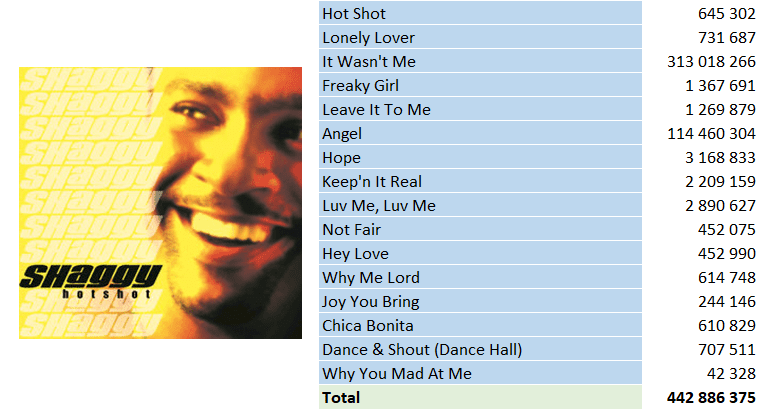 Hot Shot is Shaggy‘s 5th studio albums and very easily his most successful. It hit #1 in Canada, Germany, New Zealand, the UK and the US, #2 in Australia, Austria, Switzerland and top 10 in numerous other countries. To date the album has been certified by the RIAA for over 6m shipments.

Hot Shot is really just about two tracks, two tracks which contribute an astonishing 97% of all its streams.

2nd single Angel, might only provide 28% of that total and 114.4m streams but it actually went one better than It Wasn’t Me, by hitting #1 in 10 countries ans also finished in the top 10 2001 year end singles charts, in 8 different countries.

The other 14 tracks are very poorly received in comparison, with 9 tracks not even making it to 1m streams a piece. In total they only account for 15.4m.

Chocolate Starfish‘ absolutely smashed into life. Limp Bizkit‘s smash album debuted in the US at #1, selling a record breaking 1,050,000 copies in its first week. This is the highest figure for any rock act in the US and the only time a rock band has shifted over 1m copies in a week. The album hit #1 in 10 countries and went top 10 in a further 8. It has been certified Multi-Platinum in various countries, 6 times Platinum, in the US and Canada, 4 times in Australia and twice in the UK.

While a few tracks on the album are not particularly well listened to, the majority have great numbers. There may be no super monster tracks on it, but 7 of the 14 tracks are over 10m. Leading the way is 3rd single Rollin’ on 144.3m, followed by 1st single Take A Look Around on 92.6m and 4th single My Way on 87.3m.

Coldplay‘s Parachutes is remarkably durable the whole way through, with 9 of its 10 tracks over 21m, 5 over 51m and no track below 18m. The albums 2nd single Yellow is its monster track at 400.1m, it provides just over half of the album’s total streams and ends up as the 2nd most streamed song of 2000. 3rd single Trouble adds a very credible 110.3m to the mix, while album track Sparks comes next at 60m, then its 4th single Don’t Panic on 57.9m and 1st single Shiver on 54.6m.

The remaining 5 album tracks are certainly no slouches either, with them adding a very decent 117.1m streams combined. 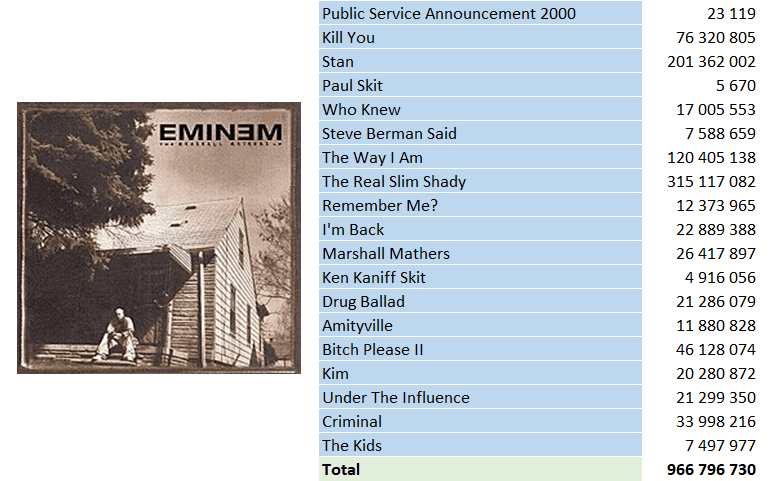 While these 3 songs have 637m streams in their own right, enough to finish this 2000 list in 4th place, the rest of the album has 330m streams, enough to see them finish in 9th place overall. These remaining 19 tracks are thus fairly big, with 11 of them over 11m and 8 of them above 20m.

Well I didn’t see that coming, an absolutely outstanding total for Linkin Park‘s Hybrid Theory, the highest for any album released until 2000. In achieving a staggering 1,440m total streams it boosts past previous highest albums Nirvana‘s Nevermind on 1,342m and Dr Dre‘s 2001 on 1,330m.

For such an impressive current tally, the album was certainly not successful from the off. In the US it entered at #16 in November 2000, then fell down the chart, before finally climbing back up in mid-late 2001, eventually hitting #2 in January 2002, some 13 or so months after its release and as of today, has racked up 229 weeks on the Billboard 200.

It was also a slow starter in the UK and many other territories. In the UK it entered at #130 and took 17 weeks to hit the Top 10, eventually spending 8 weeks there and peaking at #4. In time though the album has become a great seller, receiving multi platinum awards in many countries around the globe and is currently estimated to have sold over 21m copies.

Its other 10 tracks ship in with a huge 428.4m streams, with every one of the 10 sitting above 21.5m, this also gives it one of the highest lowest tracks, on any album that has been studied so far.

I was wondering if there was any plan to make a list of each year of the 2000’s?
Really liked the article for 2000 albums.
Keep up the great work!

I wasn’t surprised that the “Hybrid Theory” album of Linkin Park is the most streamed album of 2000s.

All year we have been hearing about Drake ( slick and state of the art marketing (& hype) charting 10 or 11 songs concurrently through streams ( that is awesome ) but then when physical figures ( for full 2018) were released( today) the top album seller is Mr .Mathers!Notice the horrible sales , very few Platinum ( in physical sales) and not many Gold either in the overall recording industry!We are truly in a new world where streaming is “ it” G.( and company)!More To the point despite the Drake chatter Mathers was the best physical seller of albums/cd’s… Read more »

He has been selling for 20 years most physical now more so streams so he has been key in both.His Soundscan sales in US alone are amazing relative to everyone else. Not my forte of interest but remarkable . Those that are all timers are mostly physical with consistent catalogue( now regular Top 200 as well). It’s consistent sales that they have in common.Most agencies are very inaccurate as everyone with a brain knows Sinatra had 32 top 10 albums( 42 with film soundtracks) before Soundscan existed ( 58 top 20 & over 90 on charts ( that doesn’t include… Read more »