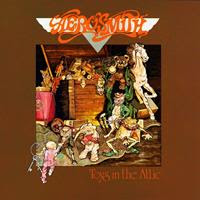 Aerosmith – Toys In The Attic

Following table lists all relevant records which contain tracks originally released on Toys In The Attic 1975 album. Green records are Live albums, grey ones are Compilations while orange items are Music Videos, with all formats considered (VHS, DVD, Blu-Ray etc.).

How to understand this table? If you check for example Greatest Hits line, those figures mean the 1980 compilation sold 13 million units worldwide. The second statistics column means all versions of all songs included on this package add for nearly 190 million streaming plays on Spotify as of May 6th 2016.

The third column showing 105 million represents the number of streaming plays on Spotify by songs of Toys In The Attic featured on Greatest Hits compilation. This 10-tracks hits package indeed contains both Sweet Emotion and Walk This Way which are two of the three main attraction on the record along with 1971 single Dream On. Thus, streaming figures tell us Toys In The Attic songs are responsible for 55% of the Greatest Hits tracklist attractiveness, which means it generated almost 7,2 million of its 13 million sales.

Using the same method for all those records concludes on a massive 13,6 million full lenght records sold on the back of Toys In The Attic, more than what the album sold by itself. This highlights how much of an error it is to focus solely on the original album results.