tHE bEATLES VS MICHAEL JACKSON 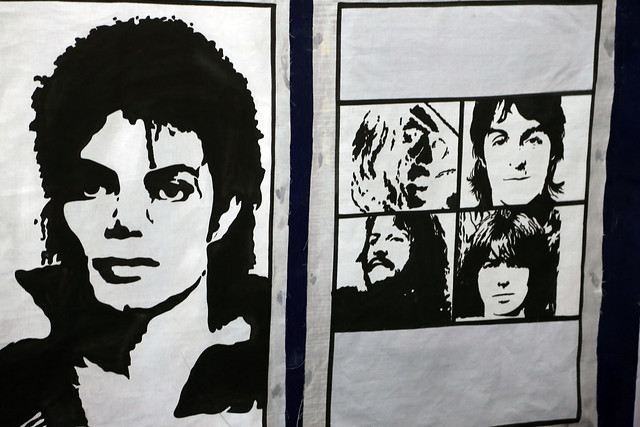 Below is the Top 20 Songs ranking and Top 10 Albums ranking of both artists merged. As previously mentioned, to get a relevant comparison figures represent the new streams received between March 9 to April 9.

As you may have noted, songs by the Jackson 5 / the Jacksons are included, while songs by John Lennon, Paul McCartney, George Harrison or Ringo Starr are not. This may seem an unfair ruling but it is implied by Spotify work process. In fact, if you join the Beatles page and play their songs in random mode, only the Beatles songs are streamed. In the other side, doing the same on Michael Jackson page will air hits of the Jackson 5 / the Jacksons because of their shared compilations like 2005 set The Essential. As the majority of Spotify users are free users, they only access the random mode, thus making this technicality a key element. In any case, no song from Beatles solo careers would be featured on below Top 20.

The fight is rather close with Michael Jackson owning 11 tracks against 9 for the Beatles. The English band only owns Here Comes The Sun as part of the Top 5 yet. Billie Jean is the predictable winner with a comfortable margin. Results of I Want You Back are kinda outstanding and someway surprising yet. Some 18 months ago, while the track was already among the Top 10 catalog hits from the 60s, it was at the bottom of Michael Jackson own Top 10. Its inclusion in Guardians Of Galaxy soundtrack and Nutella TV ad increased its profile. This is a track of interest for the Beatles fans as the 1969 teen pop smash is fighting with Van Morrison classic song Brown Eyed Girl to get the crown as the 60s biggest hit. Thus, if the Beatles and more precisely Here Comes The Sun are targeting this position, I Want You Back is the song to beat.

Clearly, both of those legendary acts haven’t only released 20 songs together. Following page will focus on the Top 10 Albums.

Thanks for the response, Guillaume. I posted my above comment (with the stream totals for Queen) at the same time as you posted yours, haha.

I checked Queen’s streams yesterday and the total adds up to 1,179 million, compared to 1,013 by 27 December 2015. A jump of 166 million in about 3,5 months, but without counting 4 solo tracks included on Greatest Hits III, which would take the total to 170 million during the same time frame if included. That is an average of 48,5 million per month for Queen. Probably over 50 million (considering Spotify is getting bigger every month) in the 31 days considered above. So the total is below that of The Beatles (94 million) and Michael Jackson (63 million). According… Read more »

Very interesting comparison, I was waiting for something like this, as these two acts -along with Elvis Presley- are considered to be the biggest ever. So while The Beatles have sold far more albums than Michael Jackson, at least on Spotify/YouTube there isn’t such a gap (far from that). I remember you made a point about how these new platforms are a better reflection, a purer way of calculating, popularity and comparing acts from different eras. I didn’t get it at first, but now I’m starting to accept it that way. You mentioned that The Beatles are “ahead of all… Read more »

Hehe Hernán I was sure you were going to point out this last comment 😉 It really is on the context of the “arrival […] on streaming platforms”, those 94 million Spotify plays within’ a month put them 48% ahead of Michael Jackson and with likely almost twice as much as Queen (I haven’t audit in details their streams recently). Obviously, watching running time and considering Youtube views but Queen on a much more favorable position compared to the Beatles, although the likes Rolling Stones, Pink Floyd or Led Zeppelin do not face them as well as Queen. I’ll be… Read more »