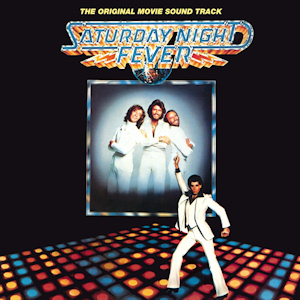 Worldwide, there was a strong debate until the beginning of 1978 about which album was the bestselling ever. Sound Of Music soundtrack, Led Zeppelin set IV, Abbey Road by the Beatles, Bridge Over Troubled Water by Simon & Garfunkel and Tapestry by Carole King were all part of the discussion at 15-ish million copies sold a piece. One movie and its related soundtrack ended all speeches within’ a few months, Saturday Night Fever.

In France, the success of the Bee Gees led soundtrack was undeniable as well. Historically, to enable main actors to promote a movie upon release, the movies industry always used a three to six months time span to release blockbuster movies, spreading largest markets every two or three weeks. This is why Saturday Night Fever movie was released in December 16 1977 in the US, March 13 1978 in Italy, March 24 1978 in UK and April 5 1978 in France.

Obviously, months before reaching April month, Polydor already saw the gigantic success of the soundtrack in the US. That’s why they released How Deep Is Your Love Bee Gees smash as early as in January. The track even climbed to #1 for a week in March, before the movie release, while the soundtrack was just outside the Top 10. The single and the album respectively sold 300,000 and 50,000 units prior the movie release. The hype surrounding the movie was absolutely insane, unseen up to that date. While the 4,3 million entries registered in theaters were already very solid, sales of related records went through the roof. How Deep Is Your Love went back to #1 for an additional six weeks once the movie was premiered. The Soundtrack shot to the top as well.

Although #1 on both charts plus second single Stayin’ Alive #2, those positions were still not fully reflecting the monster sales achieved by those records. In fact, while the album really took off along with the movie in early April, by mid-June sales were already crossing the million mark, representing an average of 100,000 copies shifted per week. Remaining #1 all summer long, the LP was already ’14 times Gold’ according to Polydor France by the end of August, 1,4 million sales, as per the same link. After deep researches all figures announced at the time were doubled yet, counting the number of discs rather than the number of albums.

Unlike Grease soundtrack that succeeded it in 1978, Saturday Night Fever failed to become a monster catalog seller. Due to this latter album being highly related to the Bee Gees, sales of their compilations, including 1979 Greatest, ate sales of the original LP. Grease obviously had no such competition since John Travolta isn’t a proper singer and has no catalog selling compilation. Saturday Night Fever still had a great revival in 1995, peaking at #15 with close to 100,000 units sold. Sales are estimated on 1,2 million by 1990, 1,45 million by 2000 and 1,53 million by now.

I have one question, where do you find the singles chart you refer to for chart position of singles released prior to 1984??? I’d be very keen to know!

I have found a very interesting website called Top France which tries to recreate the singles sales charts from the 60s until the top50 started in 1984… Could it be the one?

Thanks MJD for the feedback.
Great info as always.
Best Regards,

Hi MJD.Thanks for your work.Its awesome Do you have sales for the 3 singles of the Bee Gees from SNF? Besides Tragedy and Too Much Heaven sold as many as Stayin Alive in France? I also guees Spirits Having Flown sold about 900.000 copies in France bearing in mind sold close to 1 million in Canada as reported by Billboard on January 26 1980. Spirits I guess sold more records in the first few weeks than other huge sellers from the 70s.In Norway it sold 115.000 copies with few weeks in the charts.Thanks a lot for the feedback and kkep… Read more »

Hello Juan! I do have their singles sales: How Deep Is Your Love sold 900k, Stayin’ Alive 650k and Night Fever 350k. Too Much Heave did 850k and Tragedy near 700k. Spirits Having Flown for sure debuted big, it was #2 on February monthly chart behind Grease and was up to #1 in March chart. It then charted 2-3-3-6 until July before dropping out in September, there was no chart published in August the album was likely Top 20. It gives a calculated 386,000 units sold for the year. It is unlikely to have done more as it was never… Read more »

It is true. But you have been right in the past, so maybe I should shut up, haha.

Anyway, you made it clear in the introduction: the further back we get, the bigger the margin for error will be.

As with Grease, I’m a bit skeptical about many of the old figures relating to Saturday Night Fever. Many of them always looked inflated. I know sales were huge in 1978, but still.

Hi Hernán, Not sure why I’m not surprised 😉 Not sure if that helps either, but just two facts market-wise. 1/ In 1978 there were 94 million albums sold against 59 million singles. While album sales are spread over more titles it wasn’t as true in the past as it is now. Singles from both soundtracks sold over 4 million copies in France, which are figures 100% confirmed, representing more than 7% of the entire market and highlighting how massive they were. 2/ From 1970 to 2015, the album sales ratio US/France has always been from 7 to 11. Always… Read more »