France best selling albums ever: Breakfast In America by Supertramp (1979) 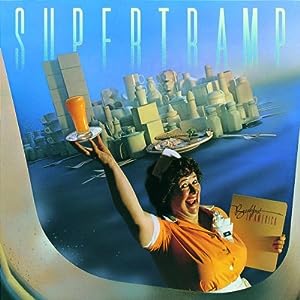 When reaching this album I almost feel the need to immediately contradict all fanciful claims about French sales of this album. Yes, Breakfast In America was a big hit album, but no it has not sold 3,2 million as ridiculously claimed by Infodisc, not even close.

The popularity of Supertramp was awful in France until 1977 with their few tour dates here selling virtually no ticket at all – reportedly eight sales, including six by their manager – with only invited people in the little crowd. During 77-78 yet they started to gain fame. Weirdly enough, their first albums to appear on charts were boxes of Crisis? What Crisis?,  Crime Of The Century and Even In The Quietest Moments… rather than the stand alone studio albums. In 1978 their new tour was already rather big and all their back catalog was starting to move interesting numbers, not even to chart but enough to send the latter two aforementioned records past Gold (100,000) status.

From the start of 1979, lead single The Logical Song of their new Breakfast In America album was released quickly flooding all FM radios. According to infodisc website, it pushed the album #1 on unofficial charts for an unreal 40 weeks. So unreal that… it isn’t true. Julio Iglesias album A Vous Les Femmes released at the same time, peaked at #4 and charted only five weeks top 10. Guess what? Iglesias album easily outsold the Supertramp set during 1979. In August 1979 Jean-Michel Jarre top two albums crushed everyone including Supertramp too.

Their album still moved an incredible 250,000 copies after only seven weeks. After four months, it was up to 450,000 units, an impressive figure, especially with both singles The Logical Song and Goodbye Stranger selling large amounts as well. Subsequent singles failed to sell that well by themselves but maintained a high level of sales for the album. Their popularity climbed so high than their two previous Gold albums climbed past Platinum (400,000) and their 1980 live album was named Paris after being recorded in the country Capital. While there was no multi-Platinum nor Diamond certifications at the time and this record had never been updated since, we do know Breakfast In America had moved 800,000 units by early 1980 while it was nearing the million mark by 1986, out of a total 4 million units in Europe as reported the previous year by the Billboard.

That 1986 year was also the one that saw the release of the band first compilation album, The Autobiography of Supertramp. While it failed to move significant numbers it ate sales of the studio albums that were already low since mid-80s was a truly bad era for catalog sales due to the switch in formats. In 1990, The Very Best Of took off, selling incredibly well during the 90s. In fact, it is a million seller soon to be added on this master series.

Breakfast In America finally reappeared on French charts in 2009 thanks to an entry in catalog chart to celebrate the album 30th anniversary. The Deluxe reissue from 2010 added to the reunion tour from the band the same year increased largely the profile of Supertramp again. Since 2011 the 1979 classic album charted an incredible 48 weeks in the main chart. It sold an estimated 200,000 units from 1986 to 2010 and 90,000 since 2011.

BIA is charting pretty well in France this year. How many copies/units are sold so far, this year, in france?

Hello Trond! Indeed during the 70s BPI certifications were based on monetary revenue. This being said, both certification levels (100,000 and 300,000) were elected because they were pretty much equivalent to the average of monetary revenue. As for Supertramp in UK, their sales was well covered by Year End charts. Breakfast In America was ranked #55 in Decade End chart of the 70s with an estimated 540,000 units sold. It must be up to 800,000 copies up to date. No other Supertramp album was ranked inside the Top 100 suggesting sales under 400,000 copies during the 70s. Crime Of The… Read more »

Do you know how many album Supertramp has sold in UK? Due to British award-rules before 1979 it’s difficult to know how many album which where sold. Until 1979 the thresholds were based on monetary revenue: BIA received Platinum Certification 09 July 1979 in UK. (300 000 album sold, or was it based on monetary Revenue?) “The number of sales required to qualify for Platinum, Gold and Silver discs was changed to the current thresholds of Platinum (300,000 units), Gold (100,000 units) and Silver (60,000 units) in 1979 for albums above a minimum RRP. Below the minimum RRP, the thresholds… Read more »