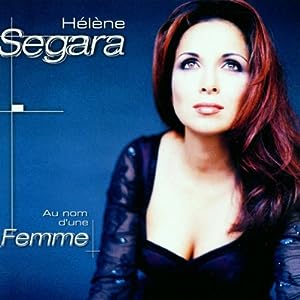 When Hélène Ségara released her debut album in 1996, it initially failed to chart. She wasn’t exactly an unknown when her follow up album, Au Nom D’Une Femme, was issued yet. In-between, she participated actively to two 2-million selling albums, Romanza by Andrea Bocelli, boosted by their duet on Vivo Per Lei, and musical Notre-Dame De Paris. Those albums were respectively the #1 selling albums of 1997 and 1998, increasing greatly Hélène Ségara popularity.

Lead single Il Y A Trop de Gens Qui t’Aiment was released with little to no fanfare yet, entering charts at a modest #41. It soon gained heavy rotation though and after the industry giants ended their Christmas season monster clash, the single started to climb up charts in January all the way to #1 on its 12th week. The album on its side opened with four weeks at 2, each of them blocked behind Louise Attaque massively anticipated second album.

With each of the five singles being supported on radio, the album stood inside the Top 20 for 49 of its 50 first weeks and its first 85 weeks without leaving the Top 50.

Today, the SNEP displays only a Platinum disc for the album. Once again, as we go back in the past, data requires more and more experience to be sorted. The #4 annual position of the album by the IFOP is also highly misleading. In fact, the album definitely outsold both Supernatural (Santana) and Play (Moby), selling 1 million copies in Europe by November 2000 and being actually certified Diamond by the SNEP in December 2000.

Current SNEP database is missing all certifications awarded from early July 2000 to the end of 2000. As for IFOP Year End chart, this is one more case of French variety album deflated by their former panel.

Ironically, the only album who outsold Au Nom D’Une Femme in 2000 is Romeo & Juliette musical, created and released thanks to Notre-Dame De Paris. Her fellow partner from the latter music, Garou, managed to be the top seller from 2001 with his album Seul, meaning Hélène Ségara has been directly or indirectly linked to the top sellers of each 1997, 1998, 2000 and 2001, although she had to satisfy herself from being ‘only’ second with her personal album.