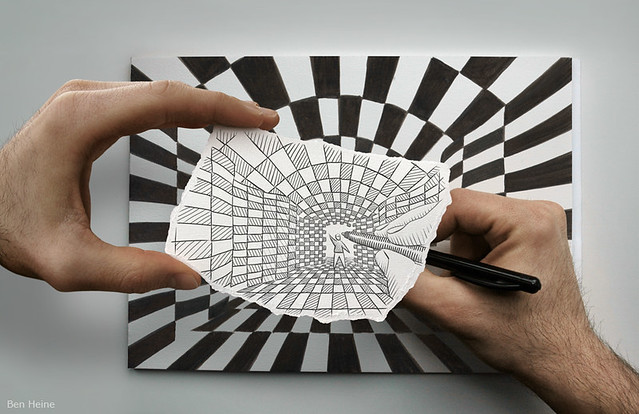 The mathematical side of things

It’s basically the favorite argument of people trying to prove that Presley moved 1 billion records: adding a nice mathematical average of units to every record for sales below/above/between certification levels. At half a million units a piece for 400+ releases, you can quickly add insane amounts. The issue is that these calculations are largely manipulated in order to falsify totals, we will review how it is done and which formulas we can set to obtain more realistic results.

Jorgensen himself likes to play the game of the mathematical mean. Here is how he applied it: 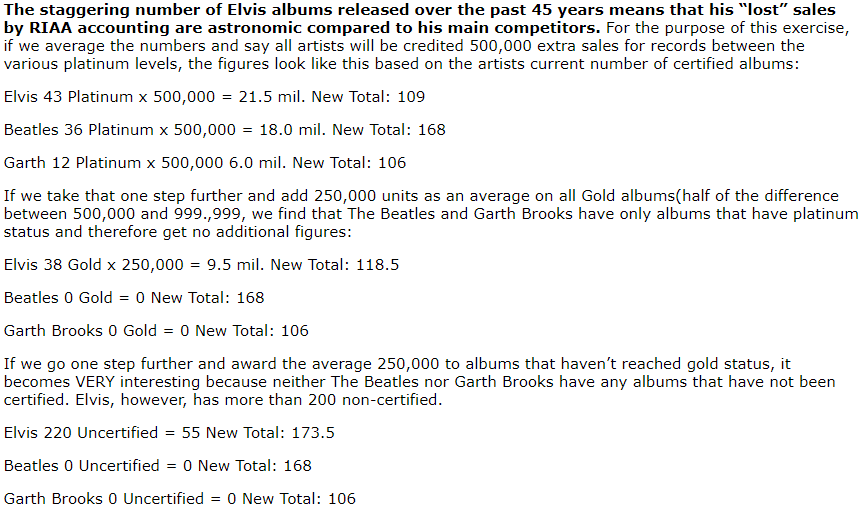 Please notice figures are from 2001. Adding 500,000 units for albums between million thresholds and 250,000 units for albums between 500,000 units levels sounds fair. It is hugely incorrect mathematically speaking though. In fact, that would make sense if each and every purchase was independent. Fact is, the most people purchase a record, the harder it is for that record to continue to amass buyers quite simply because the share of its target audience which already owns it increases. An album up to 3 million units will have a much harder time getting 1 million more buyers than a fresh new record that nobody owns. This is very visible on Presley‘s statistics. I’ll use 400 total US albums because of the influx of new releases during the last two decades but to illustrate our point that number doesn’t really matter. 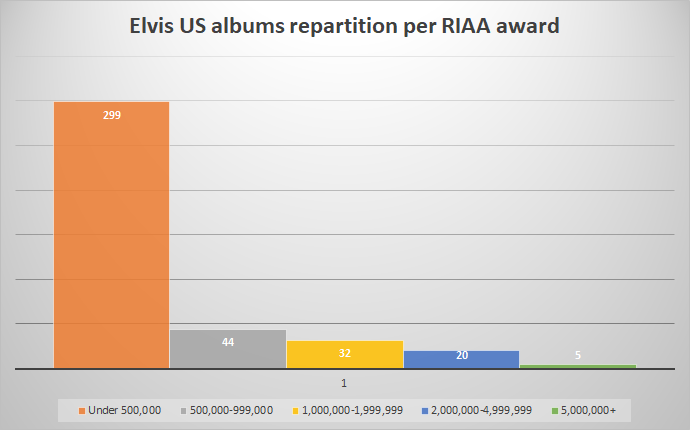 This graphic shows that the higher you climb, the least albums there is. Thus, mathematics tell the same is true inside each area. For example, among the 32 albums sitting between 1 million and 2 million, the larger part may be between 1 million and 1,5 million – in fact, after studying most of them, as few as 3 seem to be over 1,5 million, but let’s stick to mathematical concerns for now.

You may notice the graphic is misleading. In fact, ballparks do not use the same size. There is 44 albums inside a 500,000 units area while 32 stand inside a 1 million units area, and so on. A better representation is displayed below: 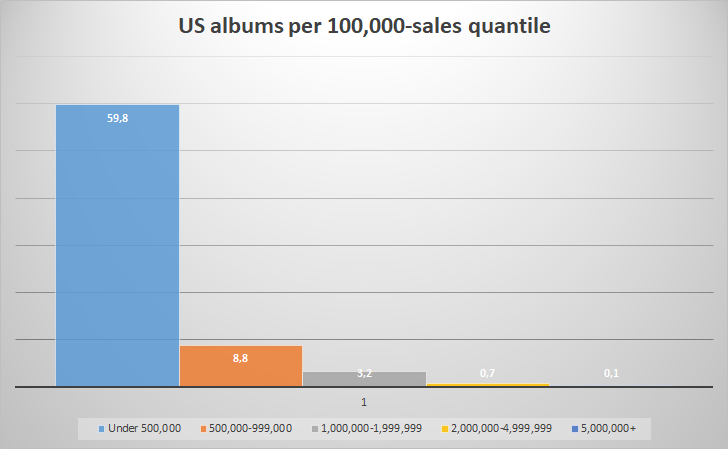 To highlight how it impacts results, below is a dispatch of the 32 Platinum discs through all 100,000 units quantiles following a linear decrease as shown by the previous graphic. Keep in mind this is a mathematical model rather than an example of a real case so the number of albums includes floats, what’s important is that the decrease is linear and that the total is 32.

Even assuming mid-range sales for each album (the “High” columns), these albums appear to have an expected mean at 1,35 million only rather than 1,5 million. Since the linear decrease of occurrences also happen inside each quantile, I added a “Low” case where we suppose sales are at a 1/4th of the quantile. Final results don’t change that much since they sit at 1,33 million.

We showed that the true mean of sales in-between certification criteria is around 34% instead of 50%. This is a mathematical point of view. Consequently doesn’t consider that some of the albums close to the next level have been pushed to it thanks to reissues like Elvis Presley, Elvis and How Great Thou Art. That situation decreases the real mean. Here, we will stick with the mathematical average still. Naturally, we wonder how large is the impact of that 34% mean instead of 50% over a discography like the one of Presley.

I manually fixed a mean of 100,000 for uncertified records. We know that it is much lower than 170,000 since it is the one for 500,000-999,000 albums. Uncertified albums include a lot of minor releases, limited albums and plenty of multi-discs that haven’t been certified Gold still. You may change it to a lower or higher value, it doesn’t change the final view.

Indeed, results provide a striking conclusion: the artificial mean set mid-way to the next level of awards nearly doubles a realistic calculation. From 78 million to 151 million. Believe it or not, that’s only one of the 3 major issues with these calculations…

It’s amusing to see that people who check in detail RIAA rules in order to find missing sales completely ignore an issue as massive as this one: the mathematical mean of uncertified sales is different for multi-discs sets.

A million selling double album will be certified 2xPlatinum. If we assume it has 500,000 units unaccounted for, we are basically saying it is eligible for 3xPlatinum! We can hardly talk about an average when we are assuming it sold the maximum possible. Of course, it gets only worst for 3/4+ discs packages who get awarded a mean which tops higher certification levels. It’s no small detail, out of Presley‘s 101 album certifications, as many as 31 involve multi-discs calculations. Below are results factoring in multi-discs:

While I mention albums because we know which ones are multi-discs or not, the issue also impacts singles since 12″ and maxi singles are also double-certified. They weren’t there when Presley peaked, but a lot of his reissues included these formats. Of course, we may try to adjust mathematical assumptions and get 42, 44, 48 or 50 million missing sales instead of 46 million. What’s clear is that we will never reach the ludicrous figure of 114,5 million that we get while applying Jorgensen’s method.

Throughout this article you saw that there is two ways to value the US catalog of Presley. The first way is to go through every release, all labels, pricing issues, etc, to find as much information as possible about all records. The second way is to set up a simple mathematical problem and go with that. Various fans, including Keene, went by a third way: they added together sales from both methods! More: they also added millions of sales for already certified material, ultimately tripling numbers. Keene got the following totals:

Please keep in mind that his figures are aimed to be all-inclusive in terms of formats.

He starts by adding a mysterious 10 million sales “awaiting RIAA certification”. We will pass on this dubious inflation method. Then 115 million are added for sales below/above/between certifications levels. As we identified, the real number is much lower.

A massive 45 million folder is added for “Sun / RCA / Pickwick”. First, the Sun records. They refer to a handful of singles Presley issued before signing for RCA in November 1955. They all failed to enter the Hot 100 and would only add residual sales that already fall under “sales below minimum certification levels” anyway. Second, he targets “RCA” missing sales pointing out at supposedly lost 1973-1976 documentation. As we can see with RIAA certifications for albums issued at that time, their audit are clearly complete. Third, Pickwick units. The issue is that they were already certified in 2008 since they were audited in 2004. This entire 45 million folder is thus a pure invention.

The category *** is detailed with double albums that were certified as single albums because of the running time – he points out Aloha – and pricing limits. We went through these disqualified sales too, showing they were both allowed in 2002 and 2004 batches of awards, respectively. That’s 20 million sales added for units already accounted for into the 170 million tally of the RIAA.

The last “others” block is justified with releases by the likes Time Life, Reader’s Digest, Camden, etc. The problem once again is that these releases were already certified by the RIAA by 2008. The ones which weren’t have already been supposedly accounted for under the “sales below minimum certification levels” category. The only true missing sales by 2008 were both Brookville releases that were at last awarded in 2010, but they got a combined 6 Platinum discs (for 3 million sales) rather than 40 (!) million.

As a consequence, from 3 million legitimate sales missing, the article adds 10+45+20+40 = 115 million sales, on top of the 115 million calculated which is itself massively overstated by over 35 million (from 78 million to 115 million) even allowing multi-discs units.

This round of monster duplicated counting happens in almost all Elvis-related sales breakdowns. That’s how they can reach 400 million units by 2008 while the current reality is much lower. An updated disc count would be 197 million RIAA certified sales plus 78 million units as per mathematical mean additions, a comprehensive tally of 275 million. Taking off extra units from multi-discs, we are left with close to 173 million RIAA certified sales plus over 67 million additions calculated, a final total of 240 million records sold.