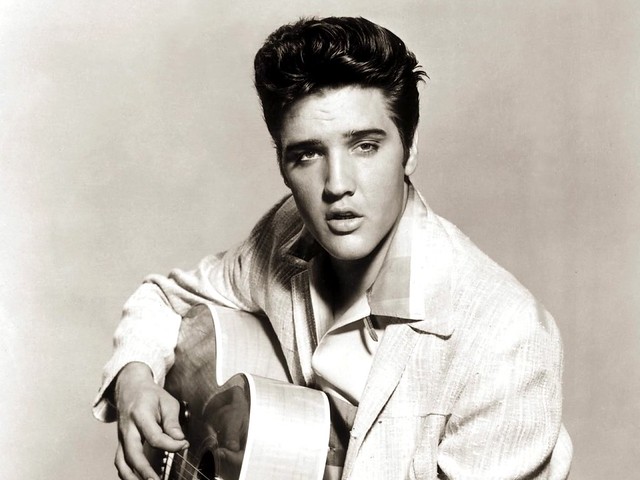 It’s time to activate the Elvis Presley mode. I feel sorry about those for who his music is not their cup of tea, but the next weeks will be all about him! It has been two years since we applied our Commensurate Sales to Popularity Concept for the first time and we went on to treat 99 artists since then. To celebrate the 100th article, the King was the obvious choice.

I’ll take advantage of this extensive study to provide some making of tips of our works. Completing estimations about an artist’s records may look relatively easy. There is chart runs, certifications, etc. It isn’t always true though. Even before getting into the numbers, some pre-estimates works need to be performed for some artists. In fact, we must consider that for someone like Presley, we will have no information at all from various market for most of his records. In spite of this situation, we will have to estimate them still.

How much has he sold in Asia, in Latin America, in Eastern Europe or in the Middle East? Rather than embarking on hazardous guesses when data is missing, the first step is to exploit YouTube views to have a clear idea of the artist’s global popularity.

In order to identify on which countries Presley performed well, the way to go is to look at the remaining monster sellers. Thus, we collected market by market YouTube statistics of all Top 4 CSPC artists so far. They are the Beatles, Michael Jackson, Madonna and Queen. Then, Adele was also added to get an artist reflective of the current market dynamics. Although Presley passed away way back in 1977, people continue to purchase his records. Thus, to get the best possible scale it is needed to factor in acts that touched a lot of consumers from all periods. From now on I’ll refer to these five artists as the scale artists.

Once we defined the strength of each market for scale artists, we calculate the average of markets. To continue with our example, our scale artists register 1,67% of their global streams in Japan. Presley‘s count there stands at 0,92%, it means the relevance of this market is only 55% (0,92%/1,67%) as high for him as for the others. 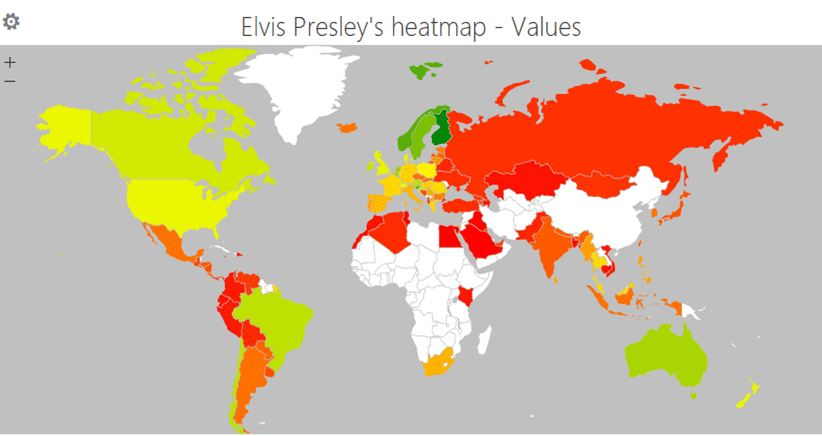 The greenest a country is, the best Presley performed in comparison to the scale artists. On yellow ones, he still does better than the average. Countries in orange represent an underperformance, which is even truer for red ones. Countries in white fail to appear among Presley‘s personal Top 100 markets on YouTube.

We aren’t done still. An artist can record a huge chunk of his views in a few countries only, say in the US. His comparative shares in remaining countries would then underperform massively reference values. This issue is known for years in the world of statisticians. A very efficient way to avoid these outliers consists in comparing rankings instead of raw values. As a result, instead of saying that Presley outperforms the scale by 2,23 to 1 in Finland, we will say that Finland is the country of rank 1, the one where he performs the best relatively speaking.

The greenest a country is, the highest it is among Presley‘s top markets and so on until red markets.

The values map confirms something we expected: the King did wonders in English-speaking countries, in Scandinavia and in Benelux. Among positive surprises, his current views on Brazil and Chile as well as in Slovenia and Croatia are very solid. These four markets belong to his Top 20 countries. As for Asia, the most favorable country from the region for Presley is Hong Kong, although it is only his 18th. Inside his Top 35 are also Thailand (23rd), Singapore (25th) and Malaysia (28th). Unsurprisingly, they are either the most touristic countries of the continent or the ones with an history of British colonization.

The negative conclusions is that he has below-par shares in 70 out of his Top 100 markets. He also records so-so results in relevant markets like Japan, South Korea, Taiwan, Spain, Italy, Mexico and Argentina. In remaining Latin American countries, in Eastern Europe and in all countries going all the way from Botswana to Pakistan his popularity is fairly modest.

A last comment is the position of the US and the UK, respectively #15 and #14. While these rankings may seem low, he is still over-par by roughly 30% in both countries. Their relatively low placements are more due to the widespread appeal when the global market was huge of acts like Jackson and Madonna. This deflated the relevance of rich countries with a low population like Sweden or Norway, catapulting their relative importance for someone like Presley.