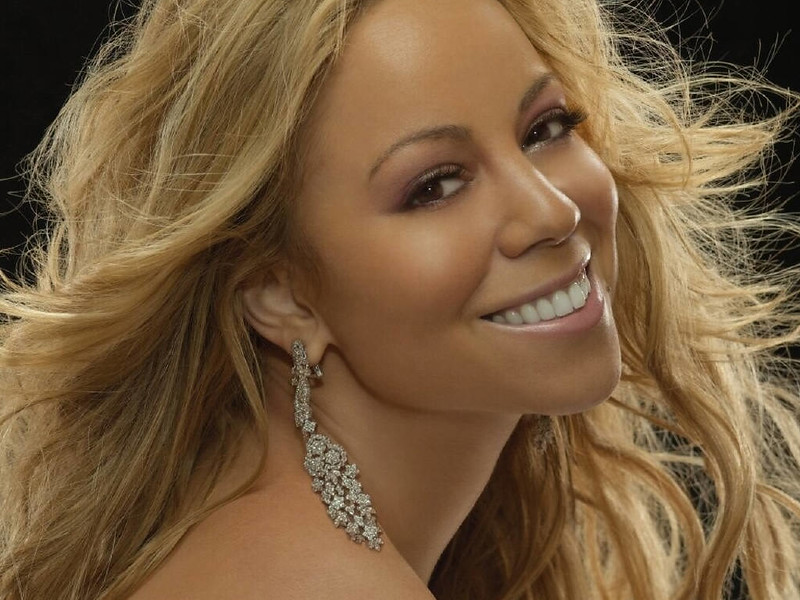 Mariah Carey is among the Top 3 best selling female artists of all time. She has massive sales in North America and Asia. In Japan, she even outsells the likes of Madonna and Celine Dion. How does the legendary diva perform in the rest of the world? We’ll find out shortly!

It is often said that Mariah Carey is much bigger in the US than in the rest of the world. While her US success is out of this world, she also enjoys extraordinary sales in many Asian countries like Japan, Taiwan and South Korea. To this day, her sales in several countries remain unknown. In this article, we will use the distribution of her views from every relevant market to complete the global map of her fame.

In order to identify on which countries Mariah Carey performed well, the way to go is to look at the remaining monster sellers. Thus, we collected market by market YouTube statistics of all Top 5 CSPC artists so far. They are the Beatles, Michael Jackson, Elvis Presley, Madonna and Queen. Then, Adele was also added to get an artist reflective of the current market dynamics. Referenced at the time of their own studies, Meat Loaf, Jennifer Lopez and Frank Sinatra add volume and thus consistency to the scaling group.

Once we defined the strength of each market for scale artists, we calculate their respective average. To continue with our example, our scale artists register 0,47% of their global streams in Taiwan. Carey‘s count there stands at 1,14%, it means the relevance of this market is 243% (1,14%/0,47%) as high for her as for the others. The greenest a country is, the best Mariah Carey performed in comparison to the scale artists. On yellow ones, she still does better than the average. Countries in orange represent mixed performances, the most red they get, the most there is an underperformance. Countries in white fail to appear among personal Top 100 markets on YouTube of all our scale artists.

We aren’t done still. An artist can record a huge chunk of his views in a few countries only, say in the US. Her comparative shares in remaining countries would then underperform massively reference values. This issue is known for years in the world of statisticians. A very efficient way to avoid these outliers consists in comparing rankings instead of raw values. As a result, instead of saying that Mariah Carey outperforms the scale by 4,08 to 1 in the Philippines, we will say that the Philippines is the country of rank 1, the one where she performs the best relatively speaking. 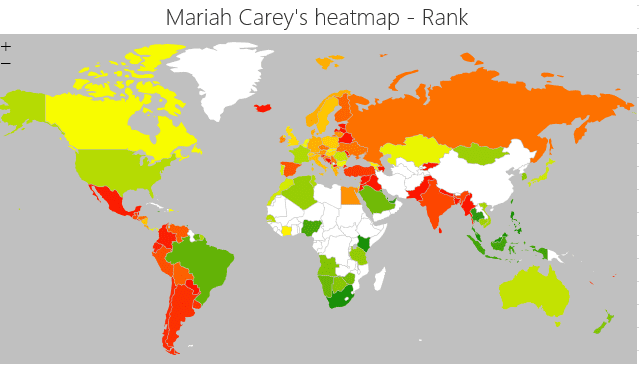 The greenest a country is, the highest it is among Mariah Carey‘s top markets and so on until red markets.

It has been known for decades that Carey has extraordinary sales all over Asia, so the fact the Philippines appears to be her best market is not surprising in the slightest. Malaysia (#6), Taiwan (#8) and Thailand (#9) are her best Asian markets along with the Philippines, which ranks at #1. The diva also seems to be quite popular in the Middle East, with Qatar (#7), United Arab Emirates (#10), and Kuwait (#12) rounding up her Top 15. What’s more surprising is the fact that Japan ranks only #42 given that she’s the best selling international female artist in the country. It is down to the fact that various international artists also did well there while hitting big numbers in continental Asia is rarer, making Carey’s numbers all the more impressive.

While her Asian dominance is hardly shocking at this point, her popularity in Africa remained a huge mystery till this day. Thanks to the global heat-map, now we know Carey is quite popular in Africa. Kenya and South Africa are her best African markets, ranking at #4 and #5, respectively. Nigeria and Mauritius also appear in the diva’s Top 20, at #15 and #18, respectively. It has to be said that many global superstars fail to make it big in Africa, so this says a lot about her global reach. In a world of physical formats, fame in these countries hardly translated into great sales since there is virtually no legal market except in South Africa. As internet is getting developed in the region at the moment it is going to impact streaming results of our favorite artists in years to come.

Carey‘s popularity in Europe is often questioned. While the diva has respectable sales in the continent, they aren’t that impressive in comparison to her peers such as Madonna and Dion, or even her own sales in Asia and North America. As a result, no European country makes the singer’s Top 40 aside from France, which is easily her best market ranking at #36. Romania, Portugal, and the Netherlands also appear in the Top 50 at #41, #45, and #50, respectively. The diva doesn’t rely a lot in several key markets, such as the UK (#59), Poland (#62), Italy (#65), Germany (#67), Ireland (#75), Russia (#79) and Spain (#84), as well as Scandinavia as a whole.

We don’t know much about Carey‘s popularity in Latin America, aside from the odd certification in some key markets. Mexico is one of the diva’s worst markets, ranking at #95. In fact, Uruguay (#90), Argentina (#91), Chile (#92), Ecuador (#93), Colombia (#94), Mexico (#95), and Paraguay (#96) are all among her worst markets ever. Conclusion? Carey is truly unpopular in Latin America, although the diva does exceptionally well in Brazil, which ranks as high as #20 for her.

Carey‘s popularity in the US is fully displayed in her global heatmap, ranking at #37. Surprisingly, the diva also does quite well in the Caribbean, with Jamaica and Trinidad and Tobago ranking at #2 and #3, respectively.

Please update Mariah’s CSPC this year!!! We can’t to know how much sales she added from your last review. Thank you in advance.

Mariah tanks in all hispanic speaking countries because ballads are REALLY well covered on those places by male and female artists. Also, at her peak, most spanish speaking nations were entering the tropical-caribbean dominated rankings, leaving behind latin rock (which they haven’t left since), so she had exceptionally bad timing. Indeed her timing was so unlucky that when the window was right for great balladist and romantics (like Sin Bandera) she was at an all time low, and when emancipation of mimi arrived, Reggaeton was just too much to cope with (really, in markets like Chile it really was like… Read more »

I think no foreign ballad singers have ever make it big in Latin America. MJD once explained Latin America are highly receptive towards Rock and visual artists like Britney Spears, Backstreet Boys, etc. Which make sense since telenovelas is huge there. Whitney Bodyguard soundtrack and Celine My Heart Will Go On only became big because it was a soundtrack which goes back to being visuals.

Not surprised by the Philippines. They love her lol Especially the song “Through The Rain”

She was never huge like her peers in Europe which was kind of weird but her success in the Middle East and Southern Asia kind of surprises me.

Its actually not weird. Europe is not big on R&B based music. Also, they love dance/pop/rock mostly. Mariah is a R&B w/ light pop act. Also, she barely toured (especially in Europe). So her European numbers are actually really good. Music Box was huge there.

True. Mariah did very well in Europe, specially for a R&B act. And her peak there was huge when she was a A&C Diva during 1993-1996. She also enjoyed success in South America, not on the same level as somebody like Madonna for example, but still successful. She has achieved more in terms of global comercial success than some people think.

I just don’t understand how these things work. How is it possible that she enjoyed mediocre heat map in Japan, when she is the best selling foreign artists there? Perhaps using streaming to determine how big an artist is in certain geography is not really an accurate measure.

This doesn’t mean that she underperformed in Japan, it just means that her popularity in other countries is even more impressive!

Because Japan is a relatively easy market to succeed for international acts. Mariah is the best seller, but there are other artists with impressive sales as well.

I would disagree with you. Many acts who were big in Asia, Europe and the US, didn’t really made it big there. For example Britney Spears and Phil Collins were big all over the world, but not Japan. Japan is actually a very complicated market.

Her views aren’t being compared against all music artists, just the scale artists. 4 of them were hugely successful in Japan (which is hardly surprising since they were huge everywhere) and we already know from her article that one of them, Madonna, performed better in terms of Youtube views. That doesn’t necessarily mean that international acts in general do well in Japan; as Jazmine noted that’s often untrue.