A lot has been said about Time-Life albums. By the end of the 90s, their music section was grossing $300 million a year selling up to 15 million units at their 2001 peak. They issued over 100 new albums per year, mostly various artists compilations which were their top sellers. Below is their comprehensive list of Presley releases: 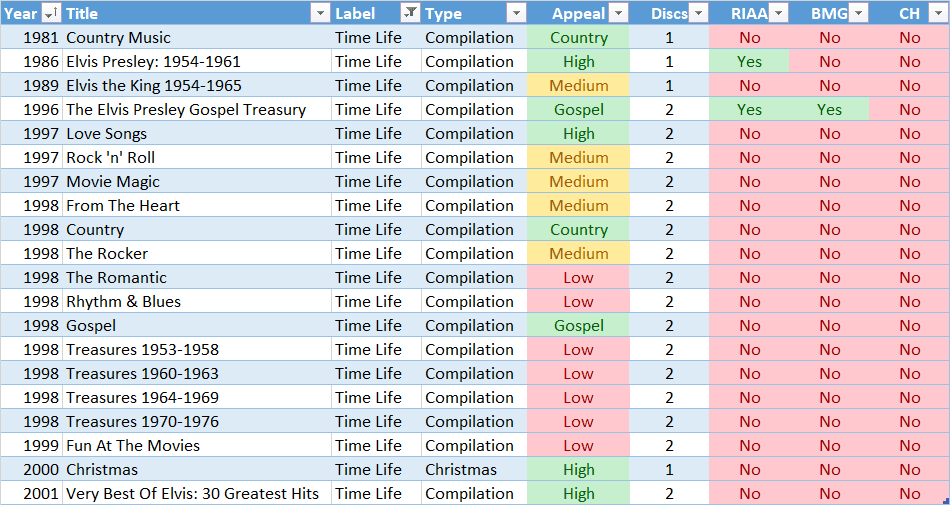 Outside of Soundscan panel

The first question is about their Soundscan eligibility, are they counted as part of his near 40 million sales since 1991? Among them, only one charted on Billboard rankings, 1998’s Country. Since Billboard are based on Soundscan sales, we can believe these sales are eligible. It isn’t as simple though.

Basically, Time-Life was a direct marketing company. They sold their products thanks to massive TV promotion on late hours, shipping them after mail orders. It means their albums weren’t available at retail. Unless they purposely sent their data to Soundscan, they weren’t accounted for. It’s confirmed by the various multi-artists records that went Gold or even Platinum over a short period but still never charted.

The exception of Country

Rather than the norm, Country was the exception. Labels used companies like Time-Life for long because they gained money on these deals, but also because the extensive TV promotion fueled their own compilations at retail. In order to benefit from that boost by themselves, Time-Life started to release their albums at retail in late 90s. Obviously, they haven’t been putting their entire back catalog of titles at retail from one day to another. Instead, they issued their top sellers.

Among Presley‘s series, Country made the cut, hitting retail on a new special edition in 2000. It’s the only out of the entire collection that got this treatment, which also explains why it is the only one that has been tracked by Soundscan.

Since they are mostly left out of Soundscan panel, it’s a highway to claim whatever we want about Time-Life sales. In reality, we still have plenty of data about them. While they were unscanned, these records were eligible for RIAA certifications. In fact, both Elvis Presley: 1954-1961 and Gospel Treasury went Gold. There is more: they were audited in 2002 and 2000 respectively, and the Collection of 15 titles issued from 1997 to 2000 were double albums with the exception of Christmas. That’s a fundamental information since the bulk of sales of these releases happened before 2002, so they were all under the Gold criteria, which in their case means under 250,000 units per title.

We also know the organic appeal of these albums as well as the fact that Time-Life type series always sell more with the first releases, with units moved going down album after album. One of the responsible of Presley‘s catalog at BMG back then, Michael Omansky, stated the following in 09/23/2001 about these releases:

I did the continuity series with Time-Life (first time they did a series on a specific artist/over 2 million double albums sold in the U.S. to date via mail order)

In this interview, Omansky strongly praised his own work with the catalog of the artist, putting things in a very favorable way and with highly liberal rounding’s, so we should take this 2 million figure with a pinch of salt. Technically speaking, the series started with Love Songs in 1997 but it’s more than doubtful that while highlighting his successes Omansky would have been so strict to exclude Gospel Treasury which is also a Time-Life double album. Also, executives always put the “over” word before every figure for pure marketing purpose even if the release is 10% under the stated number.

Let’s summarize what we do know about their sales:

As you can see, the margin of error is fairly small with sales pretty much under control. We can safely assume that titles like the first Love Songs and the favored Country are quite close to 250,000 units while the later, less appealing releases like the Treasury sets are most likely under 100,000 units. With the overall total more or less on 2 million, the ballpark is pretty thin.

Putting all information together we obtain above results. The last Very Best Of was already outside of the collection, thus not enjoying the complete my collection behavior. It also had less time to sell before it was withdrawn from Time-Life’s catalog.

That’s a total of 3,61 million units sold. These same albums are certified cumulatively for only 750,000 units sold while they account for a mere 125,000 Soundscan sales – the estimated retail sales of Country.