Presley issued 29 EPs from 1956 to 1967 in the US, 16 of which went at least Gold which represented 250,000 units in this format. Please notice that Loving You Vol.1 is only Gold while Loving You Vol.2 is Platinum as per the RIAA. Both Ernst Jorgensen’s internal figures and Billboard EP charts suggest this is an error, the correct awards must be reversed.

In total, these 16 EPs add for 7,5 million units certified. In the UK, he amassed 15 charting EPs from the introduction of that ranking in March 1960, 10 of which went Top 10. Results for each record is listed below. When there is two titles separated with /, the one at the left is the US naming while the one at the right is its UK partner. 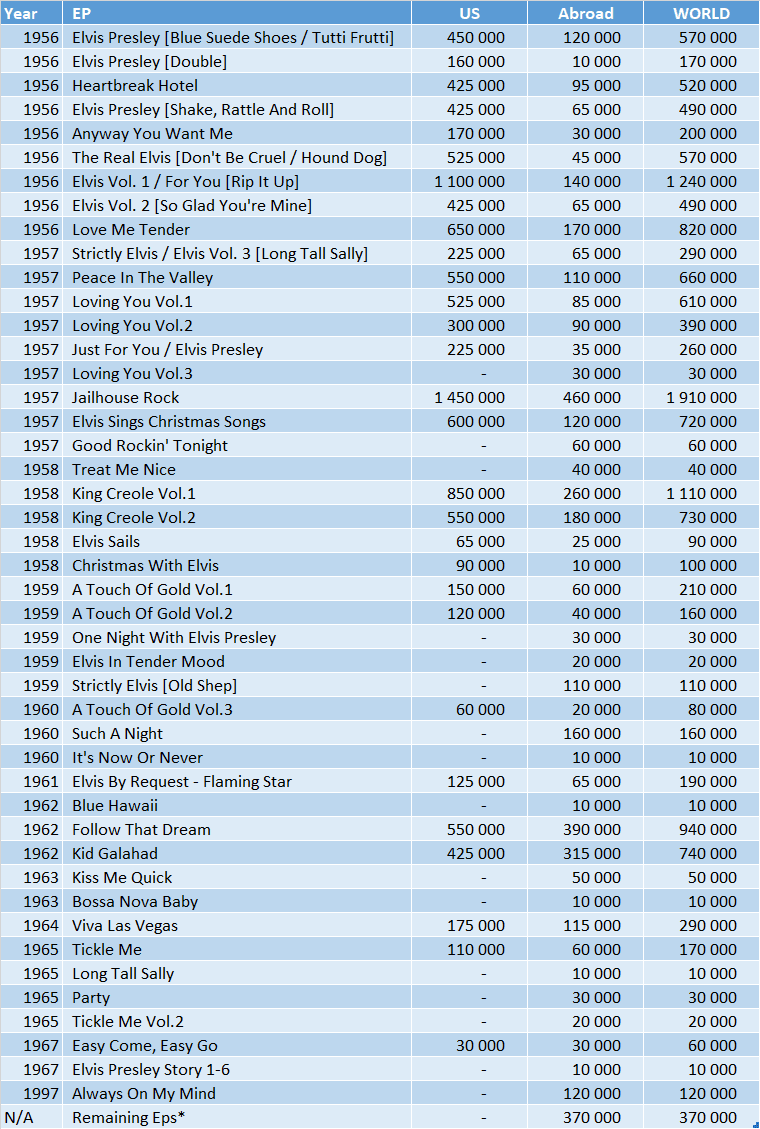 Jailhouse Rock is easily the top seller. The monster single was quickly issued as an EP too, destroying the competition. This record led its format chart for a stunning 28 weeks, storming over a million in the process. It kept reentering the Top 10 during 18 months. That period was really the peak of Presley‘s hype. In December 1957, Jailhouse Rock was #1, Sings Christmas Songs #2 and 7 more EPs from him were going in and out the Top 10.

*remaining EPs refer to various records locally released that got no US version. There is 8 German titles, 22 French EPs, 5 Italian, 15 from Spain and about 20 more from remaining markets like New-Zealand. There is no trace of them in local charts so their individual numbers would be from 0 to 10,000 copies sold, with possibly a few exceptions. Averages linked to the market size, from 1,000 units sold for New-Zealand releases to 10,000 for German ones, have been assumed, concluding on 370,000 cumulative sales.

N/A includes all local releases plus years that saw no US release. We can easily see how that country jumped into Presley‘s EPs before anyone else while foreign sales took over through the years. By the 60s, he was already selling as many EPs abroad than in his native country.

The total falls close to 16 million units sold. That’s no surprise since every NME / Joseph Murrels publication assigned him with 15 million EPs sold during his career. With a 0,5 weighting on our CSPC formula, these sales are worth nearly 8 million EAS which may be key to define Presley‘s final ranking.

LPs,such as ( previous) EP product issued on (fairly) successful product such as “C’mon Everybody’,”I Got Lucky” & “You’ll Never Walk Alone”.Other “Camden “product found mostly re-issued material marketed only as “Elvis”./What a shame his legacy had not been given a better concept of releases (with a few exceptions) while alive .I am more than sure that the “Jailhouse Rock” EP outsold any other EP,as by Cliff Richard or anyone else?As far as actual sales,especially for Elvis,but not ONLY for Elvis,I suggest that you find the song writers (royalties) for each song.This would get rid of a lot of the… Read more »

Great work! Love all of these articles. 🙂

It’s a little mind blowing – how long it takes to finish this analysis. The most complicated analysis to date, if i’m not mistaken, was Barbra, with 92 pages. And that took a couple of weeks. Elvis just blows it out of the water. We’re probably expecting 300+ pages of analysis. Can’t wait to read it.

MJD posted at the beggining of the week. The Elvis CSPC is going to be posted very soon … I can’t wait till they’re done with that damn Elvis. There are so many artists left to study ! 🙂

There are at least another 50 or 60 acts just to cover the remaining superstars from the US and the UK. Then they’ve got all these acts that are huge in their own nations like Cold Chisel, the Tragically Hip, B’z, Die Toten Hosen, etc. still to do.

Just from the US and the UK?

This site has got me going back and really looking at the numbers. First and foremost, I’m a rock and old school R&B fan. So much country and traditional & contemporary pop is off my radar. For example, I was just looking at George Strait (my cousin’s a huge fan). 50 number ones on Billboard’s country singles chart, gull durn! It might be another 150-200 before they can finally start moving beyond the US and the UK.

LOL, I was just thinking that. (I’m gonna look like an ass if it ends up being true)

I was honestly starting to suspect he had passed away as well. 😅
None of Chartmasters’ social media has been updated, not even their Twitter.

All his figures are now completed. Their simple entrance / copy into templates for macro took me days. I’m now in the writting process, I’ll be dropping 3/4 articles including the CSPC one this coming week!

Great – looking forward to them.

Looking forward to reading it. I’m sure there will be lots of interesting finds and maybe a few surprises.☺

This website uses cookies to improve your experience while you navigate through the website. Out of these cookies, the cookies that are categorized as necessary are stored on your browser as they are as essential for the working of basic functionalities of the website. We also use third-party cookies that help us analyze and understand how you use this website. These cookies will be stored in your browser only with your consent. You also have the option to opt-out of these cookies. But opting out of some of these cookies may have an effect on your browsing experience.
Necessary Always Enabled
Necessary cookies are absolutely essential for the website to function properly. This category only includes cookies that ensures basic functionalities and security features of the website. These cookies do not store any personal information.
SAVE & ACCEPT
wpDiscuz
63
0
Would love your thoughts, please comment.x
()
x
| Reply