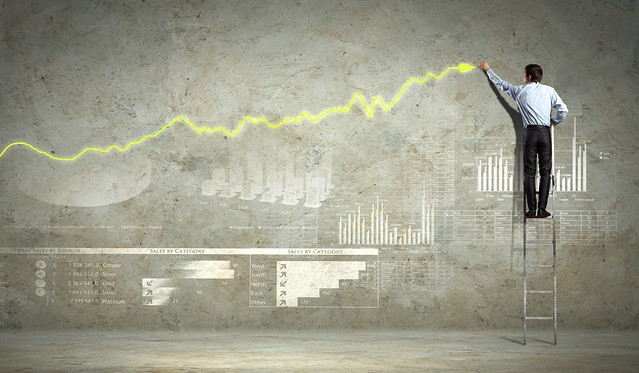 Do you need ongoing momentum to hit your peak? 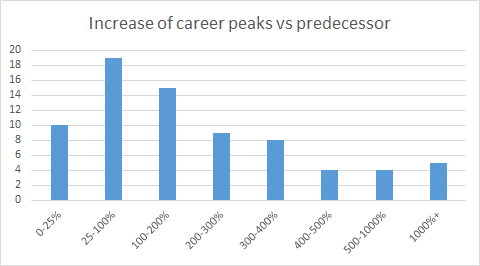 This picture lists how much an album had to increase to reach the peak of its artist. For example, 5 albums outsold their predecessor by over 1000%. They are the biggest albums of Paul Simon, Pink Floyd, Cher, Bon Jovi and Green Day. These artists grew immensely in an unexpected way.

While the majority of peak albums at most tripled sales of their predecessor, we can see that plenty of them still posted increases of 300%, 500% or 1000%. A point often overlooked is that these predecessors have been fueled by the blockbuster which followed them. Thus, the true jump is even larger. These statistics prove that the magnitude of a smash isn’t limited to the appeal demonstrated with previous releases. 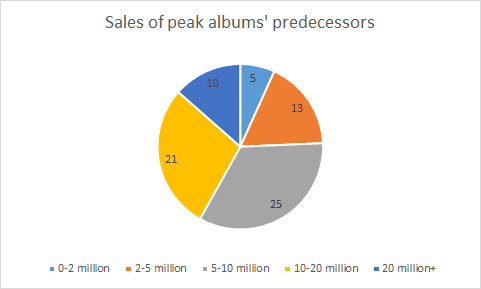 This schema points out the sheer amount of sales achieved by predecessors of peak albums. We see that as many as 56 predecessors of top sellers out of 74 generated 5 million sales or more. Of course, here too we need to keep in mind they were boosted after the end of their own run. Only 5 predecessors remained under 2 million EAS.

Out of these, Kendrick Lamar, The Weeknd and the Arctic Monkeys are still building their catalog, there is no doubt they will cross this figure in the long run. The last two albums which preceded a career peak that sold so few are from Cher and Paul Simon. Ironically, their peaks are 2 of the 3 highest selling eras ever for artists over 40 years old. In other words, their blockbusters haven’t fueled their predecessors because they already had a healthy and diverse catalog. In most, people weren’t discovering them so they haven’t feel the need to complete their discography.

On the whole, it’s more peak albums which fueled past albums than past albums which paved the way to peaks. A last confirmation of this comes from this additional table. We can see that out of these 74 predecessors, as many as 24 were themselves down from their previous album. To sum up, there is no such thing as a momentum that prepares you for your peak. 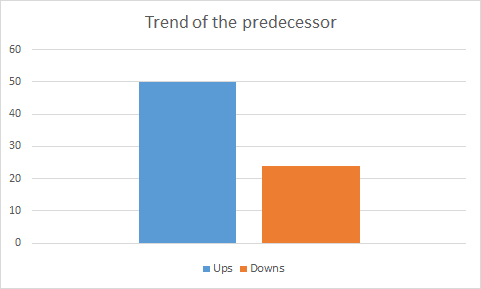