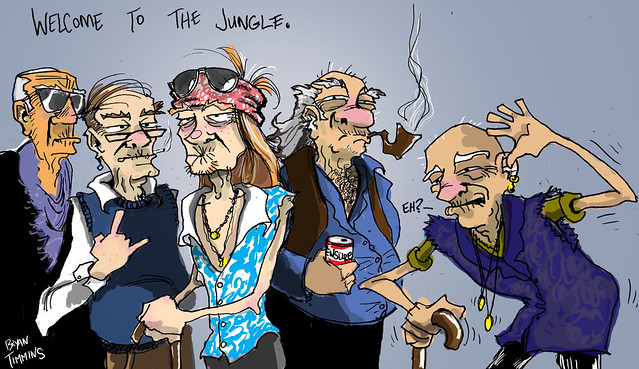 Guns N’ Roses are possibly the only band that attracted, and infact still attracts to this day, both fans of classic rock music and fans of 80s arena rock. Such hits as, Sweet Child O’ Mine, Paradise City, Welcome to the Jungle, November Rain and Knockin’ on Heaven’s Door are still immensely popular.

Considering the majority of their successful singles came out in a four year span from mid-1988 to mid-1992, the cumulative sales reached by the band are outstanding. In terms of strict album sales, their 1987 classic Appetite For Destruction is one of the 22 albums in the 27-33 million units range worldwide, good enough for a spot just outside the all-time Top 10 best selling albums. Their career total album sales challenge the biggest US groups ever like Aerosmith, the Beach Boys and Bon Jovi, just under the two highest rollers the Eagles and Metallica. An incredible feat given they released far fewer albums than most of the aforementioned.

Unsurprisingly the band’s success is visible in the digital world also, with massive download sales and streaming results. Thus, let’s sum up all their achievements in every format to determine a clear picture of their success with the various albums of new music they issued.

As usual, I’ll be using the Commensurate Sales to Popularity Concept in order to relevantly gauge their results. This concept will not only bring you sales information for all Guns N’ Roses‘ albums, physical and download singles, as well as audio and video streaming, but it will also determine their true popularity. If you are not yet familiar with the CSPC method, the next page explains it with a short video. I fully recommend watching the video before getting into the sales figures. Of course, if you are a regular visitor feel free to skip the video and get into the figures.

Hi MJD,
How does Appeticte for destruction sell in total less than the Metallica black album, given that in Canada and especially in the USA it has such superior numbers ?

I’d presume because Guns N’ Roses 2003 Greatest Hits album, takes sales away from Appetite, where as Metallica has no Greatest Hits to eat into its sales.

Appetict for destruction has higher numbers both in Canada and especially in the United States where it has well over 1,700,000 copies. The total copies of the two albums cannot be those if you add America + Europe + Australia + Asia.
The Greatest Hits counts relatively since it came out precisely because at that time catalog sales were down sharply, then it contains only 3 tracks, 5 covers and missing famous pieces like It’s so easy or Nightrain. The Greatest Hits can often be used to rediscover a band and increase not to decrease sales.

You’re average listener, consumer etc is more likely to go for an album that contains all of their hits. While It’s So Easy and Nighttrain are certainly still popular tracks, they are not that famous. Most general listeners, who are not really fans, I’d imagine, would not know these two tracks and I’d also imagine, they would probably pick an album with the three Appetite blockbusters and other more famous tracks such as November Rain, You Could Be Mine, Patience, Knocking On Heavens Door etc, things they are more likely to have heard, know or like. I agree though, I… Read more »

Maybe, but not necessarily, a greatest hits can also make an artist known and make the young man want to buy old albums, see the case of Queen, Rolling Stones or Led Zeppelin. There are also albums that sell well in the early years and then drop dramatically in the long run. In the 80s, the average listener (or the occasional listener) used virgin cassette tapes to get to know an artist, perhaps because he liked only 3 or 4 pieces. With this theory Metallica with only one Greatest Hits would pass from 133 million albums sold to sell less… Read more »

Greatest Hits etc do eat into studio album sales, it’s a fact. Obviously some albums and artists, hold up better than others but even things like Pink Floyds Dark Side Of The Moon will have been affected by their compilation releases. If no compilation existed, a studio album would have to be bought, the fact they do, means a potential studio sale could be and probably is, in the case of most artists, replaced by a compilation sale. The point you make about GH, being a conduit to an artists studio albums, is valid and will be true in some… Read more »

If a potential studio sale is almost always replaced by a compilation sale then the artists are fools. Reasoning on a commercial level it is more profitable to sell more studio albums (having no other purchase option) than a single compilation. Metallica for the genre they make is not a single band regardless. I don’t understand why Metallica is not a very successful band at the moment: thanks to the lack of compilation catalog sales of their first 5 albums continue to increase, their last tour has grossed an enormity, with your reasoning if in the middle of the years… Read more »

Not really, look at the value Queens Greatest Hits, ABBAs Gold and Bob Marleys Legend have added to their respective careers. Even The Beatles, no slouches in the studio albums department, have a lot to thank 1 for. It’s not that straight forward. Sometimes the artist might have no say, as a Greatest Hits package might be part of a contract with their label. Some acts/genres quite clearly do not really shift studio albums beyond their initial release but a Greatest Hits can keep doing great business for them, because it conveniently compiles the tracks most people are likely to… Read more »

So for you Aerosmith, Red Hot Chili Peppers or Bon Jovi are a genre that does not move sales of studio albums beyond their initial release, despite the aforementioned collections ? Or with their label they put us back in the medium / long term? I have the impression that Metallica with a best of their first 5 albums would have been hugely penalized by the sales of the catalog in the studio (also because the first four albums more than 8/9 tracks do not have). The black album without Enter Sandman, The Unforgiven and Nothing else matters is enormously… Read more »

It seems to me that Legend has taken 84 million sales to Marley with your reasoning, an enormity… https://chartmasters.org/2018/04/extreme-cspc-introducing-the-asr-artist-success-rating/2/?fbclid=IwAR140FJ-DEiW7Nb2pOCLkO5339Qul8X_CqaIPhnC2cgh80cN5FRMZtQ9QSY

Most popular Guns or Nirvana for you?

thank you so much!!!

Can you please address the discrepancy between the amount of sales for Appetite for Destruction presented here which are 30,840,000 with the numbers presented in the ”CSPC: Top Selling Albums Ever (Pure)” page which are 30,770,000.

Good spotting 🙂 Figures are before/after the adjusted calculation as per market evolution of African and Asian countries, the final one is 30,77m. The article is fixed, thanks!

I think their albums are under-certified here in Brazil, they were giants here in the 90s, their clips were showing in prime time on the highest audience channel in the country(not to mention that MTV was an open TV channel in Brazil, which helped a lot the success of the band here), even though the Brazilian album certifications are wrong, the total number of sold albums remains the same, right?
If we count since the 90s, the only band that made more success here in Brazil than Guns n ‘roses was U2

Hi Lorrane! Their albums have been properly audited multiple times in the 90s, resulting in certifications for their entire catalog. The sales displayed inside the article are incredibly good – the thing is that Brazilian market has often been massively inflated online which make them look not that huge while they definitely are. I can tell you that Guns’ Use Your Illusion II shipped 217k by late 1992 there, Appetite For Destruction was on 195k by the same date. This is perfectly consistent with their awards: 1991 Their 4 albums all hit Gold (100k). 1993 Their back catalog is audited… Read more »

Madonna’s The Immaculate Collection only 123k by 1992? Really? I’ts her best selling album in Brazil. I would think in too much more sales in the promotional period.

One of my favorites bands of all time, Too bad they didnt stay together, these guys these days could be as big as U2 and Rolling Stones, they’ve even succeeded in markets that AC/DC never got.

Wow, they deubt was so massive

Incredible sales! I saw them on the Not in This Lifetime Tour, and they were surprisingly great! Played almost 3 hours! Hit after hit!

Oh, and I thought Nightrain would’ve been among their top 15 tracks.

I love these guys. Such a tragedy they couldn’t stay together for longer and make more albums. They were the greatest rock band of their time. Its great that kids today are still liking it. 🙂

This website uses cookies to improve your experience while you navigate through the website. Out of these cookies, the cookies that are categorized as necessary are stored on your browser as they are as essential for the working of basic functionalities of the website. We also use third-party cookies that help us analyze and understand how you use this website. These cookies will be stored in your browser only with your consent. You also have the option to opt-out of these cookies. But opting out of some of these cookies may have an effect on your browsing experience.
Necessary Always Enabled
Necessary cookies are absolutely essential for the website to function properly. This category only includes cookies that ensures basic functionalities and security features of the website. These cookies do not store any personal information.
SAVE & ACCEPT
wpDiscuz
24
0
Would love your thoughts, please comment.x
()
x
| Reply