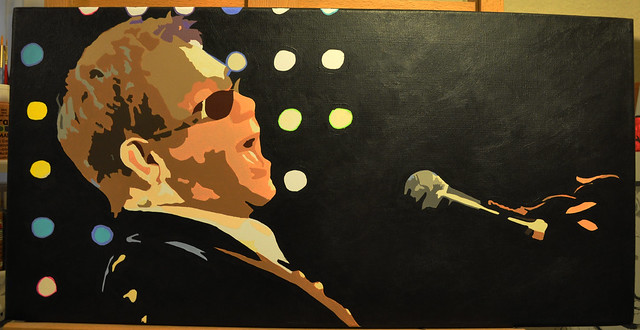 It’s not necessary to believe that the freshly announced Farewell Yellow Brick Road tour is the last Elton John will ever do. After all, it’s a basic marketing trick. Michael Jackson, Cher and John himself announced on numerous occassions a final tour yet ended up going back on the road. What we can believe though is that the British pop star has enjoyed an incredibly successful career.

It all started in early 1971 with Your Song, a Top 10 hit in both the US and the UK. Soon Rocket Man, then Crocodile Rock, then Daniel confirmed the new status of John as a big pop star. This was only the beginning of a success story that was going to last for 30 years.

John wasn’t always an evergreen seller though. He had various flop albums, he struggled an awful lot to break several markets, and his studio albums are mostly ignored today. He may not have been one of the very top sellers throughout his career, but his ability to rebound again and again has been amazing concluding on impressive totals today.

As usual, I’ll be using the Commensurate Sales to Popularity Concept in order to relevantly gauge his results. This concept will not only bring you sales information for all John‘s albums, physical and download singles, as well as audio and video streaming, but it will also determine their true popularity. If you are not yet familiar with the CSPC method, the next page explains it with a short video. I fully recommend watching the video before getting into the sales figures. Of course, if you are a regular visitor feel free to skip the video and get into the figures.

MJD, you included ‘Somebody to Love’ live, 1993 – (400,000) in the Queen’s physical Singles sales. This version was played at the Freddie Mercury Tribute Concert, and was performed by George Michael. The track was released on an EP called Five Live (George Michael and Queen). If this version of ‘Somebody to Love’ is included in Queen’s CSPC, then maybe Elton’s version of CIDW from the 1997 should also be included in the Elton’s CSPC as well?

MJD, so if we actually include Candle In The Wind for Queen Diana’s death then, then Elton John should have reached more than 200 million EAS right?

Also i thought Skyline Pigeon is one of his bestselling singles. I was wrong.

But can we call him a legend even when he hasnt really had extraordinary sales? i mean i know he currently ranks 9th best selling music artists ever and has total eas of nearly 200 million but again, he also released more than 35 albums. Even Prince who has a lower total is being considered as a legend. I cant blame people saying Elton John is a legend cos at least his total eas shows it but Prince for me isnt. And i agree with Justin Bieber saying Prince is not the last living legend and people were mad at… Read more »

Every generation has own legends/idols, whether we like it or not. For many (older) people the Rolling Stones, the Beatles, Bob Dylan, Elton John…e.g. are not a true legends, but Fats Domino, Chuck Berry, Buddy Holly, Muddy Waters….Legends never Die! 🙂

How can it not be extraordinary? It isn’t enough to pile albums to reach 200m. To get up to 35 albums you already need to be a legend. It isn’t easy to get a contract to get global releases, let alone 35 different ones. Look at recent albums of stars from 15 years ago, they are barely adding a thing to their career to date total. It takes success to make a new release valuable, especially when you aren’t on your hey-days anymore.

If Elton is legend with 35 albums, then what to say about Frank Zappa? Frank Zappa has released 119 albums! 100 studio albums, 13 compilations and 6 rock operas. MJD can you imagine the time needed for Zappa’s CSPC? 🙂

Legends aren’t based soley on numbers of albums sold. It is about so many things………many of them intangible. Creating a new style of music, making a style of music popular that wasn’t before, being one of the most popular stars of their generation, longevity over decades, timeless songwriting, stage presence, influence on other artists, things they do outside of music…….like charity and philanthropy, being versatile outside of music………like acting, etc.etc. Nirvana are Legends( One could argue that Jane’s Addiction paved the way for grunge……….making them Legends) Frank Zappa could be considered a legend Bob Marley could be,……….no, IS a Legend… Read more »

I agree with everything you said – just a small comment on Miles Davis, I’m sure his CSPC total would be at the very least 40 million, if not more! 😉

Of course, legends aren’t based soley on numbers of albums. Syd Barrett is a LEGEND, although he only participated in the two of Pink Floyd studio albums.

Hi RLAAMJR! With all due respect, although this is a site about charts and sales, the matter of a fact is that legendary status is not solely based on commercial success. As MJD pointed out, having a vast catalog and being able to produce music for so long is a proof of a long lasting appeal of an artist. Moreover, aside from commercial success, legendary status, while subjective sometimes, is also based on a mix of cultural impact, longevity, artistic influences etc. Take MJ as an example, when people think of the legacy of Thriller, most would not automatically think… Read more »

A little unrelated, but how do Raffi, MJD and some other people have a profile pic, while the rest have just a white figure? It that just for the site’s managers? 🙂

I read the total album sales page first, and it didn’t really look that impressive. But when I read the CSPC results, it was a totally different story. Guess he is a better single seller and better compilation album seller.

Hi RLAAMJR! I assume you’re talking about the units showed on page 85. Firstly. those numbers refer to success of the song rather than sales (meaning using ratios in the analysis to calculate the success of a song), in case you didn’t know that! Second, having a song at nearly 19m equivalent units is already huge! Think of the most streamed pre-2000 song on Spotify, Wonderwall by Oasis. Even that song has equivalent sales of under 15m units! The same case for all Mariah Carey singles, but are they not hugely successful? Absolutely not! In the case of Elton’s Your… Read more »

He has released more than 30 albums but only one album has sold more than 10 million copies. And his best-selling single didnt at least reach more than 15 million

His american sales are truly impressive. On the contrary, I thought he had been a much bigger seller in the UK so I’m kinda disappointed. Thank you !
How is he ranked among Australia’s best selling male singer ? Second (Michael Jackson being #1, I guess) ?

Actually, he outsold MJ in Australia. In fact, of all the analyses that do that kind of distribution by countries, i haven’t found anyone who sold more than him in the land down under. I’m guessing The Beatles sold more there, but it’s just a guess.

Also forgot about AC/DC, pretty sure they also outsold him there, it’s only natural.

I’m a little surprised that Oasis outsold him in the UK.

He released thirty(30) studio albums, the Eagles released seven(7) studio albums. But still, there is not a big difference between their total CSPC numbers.

Wasnt surprised at all. I always thought his sales were inflated