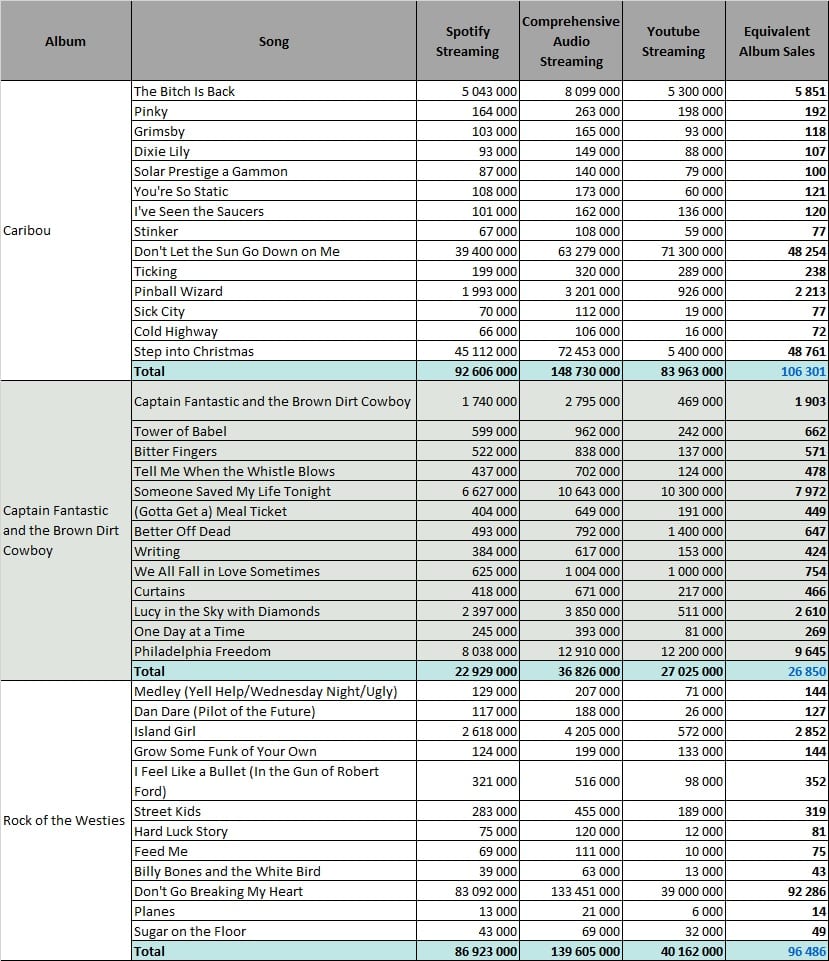 Caribou is well supported by two decent hits, Don’t Let the Sun Go Down On Me and Step Into Christmas, generating more than 100,000 equivalent album sales overall.

The story isn’t so good for Captain Fantastic which sees all its former monster sellers in physical format do very poorly on streaming platforms. Lucy In The Sky With Diamonds, Philadelphia Freedom and Someone Saved My Life Tonight were all fairly weak sellers upon release in various markets, which may explain partially why their streaming results are so low since the US isn’t as dominant anymore in that format.

Rock of the Westies enjoys the addition of Don’t Go Breaking My Heart to its track list which occurred with the reissue of the album in 1995.

This website uses cookies to improve your experience while you navigate through the website. Out of these cookies, the cookies that are categorized as necessary are stored on your browser as they are as essential for the working of basic functionalities of the website. We also use third-party cookies that help us analyze and understand how you use this website. These cookies will be stored in your browser only with your consent. You also have the option to opt-out of these cookies. But opting out of some of these cookies may have an effect on your browsing experience.
Necessary Always Enabled
Necessary cookies are absolutely essential for the website to function properly. This category only includes cookies that ensures basic functionalities and security features of the website. These cookies do not store any personal information.
SAVE & ACCEPT
wpDiscuz
66
0
Would love your thoughts, please comment.x
()
x
| Reply