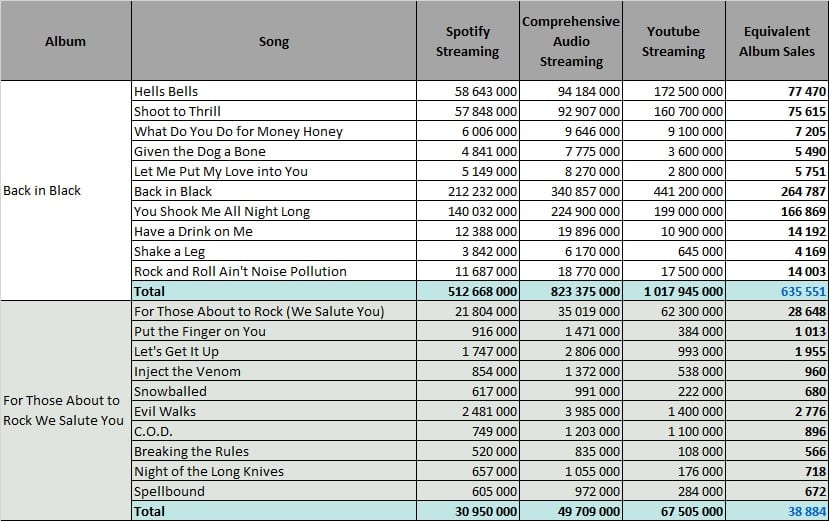 I don’t think any band ever replaced their singer with greater success than AC/DC. Back in Black not only became their biggest album, but one of the biggest albums of all time. These streaming figures will tell you why. Like the rest of the AC/DC catalog, Back in Black was not available on Spotify until June 30th 2015. Still, this 1980 album has well over 500 million streams, led by the iconic title track at 212 million. Even the smallest track, Shake A Leg, is close to 4 million. Four tracks are close to or above 60 million, an achievement only surpassed by 6 pre-2000 albums (Michael Jackson‘s Thriller & Bad, Dr. Dre‘s 2001, Pearl Jam‘s Ten, Nirvana‘s Nevermind and Metallica‘s Black Album) which are all younger than Back in Black and have also all  have been on Spotify a lot longer. This adds up to a massive 635,000 EAS.

For Those About to Rock was the 3rd album in a row produced by “Mutt” Lange, and their first US #1 (incredibly Back in Black stalled at #4). However, while it outdid its famous predecessor at first, it didn’t have the legs. The title track is a true classic, and has ended just about every AC/DC concert since, but at 22 million Spotify streams it would have ranked a distant 5th on Back in Black. The rest wouldn’t rank anywhere on it. As a consequence, the 40,000 EAS pales into insignificance compared to Back in Black. On a smaller note Evil Walks actually tops the single Let’s Get it Up for 2nd place on For Those About to Rock. Likely because the former was the only song from this album included on the Iron Man 2 soundtrack in 2010.