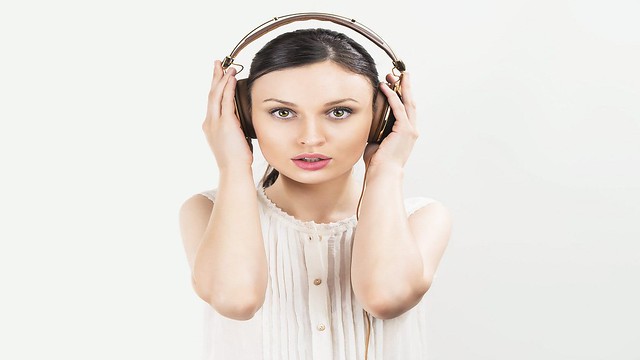 Now that we understood that hit makers were more impacted by the arrival of iTunes, we must wonder why. I started explaining it with the target audience including a lot of persons that couldn’t afford for big investments and that were still not used to buy records. One more key factor is the regular buyers vs occasional buyers logic.

The period of our life on which we are the most interested into music is by far the 12 to 25 years old period. We listen to a lot of music, on a very regular basis. Logically, those regulars consumers will be the first ones to move into a new format / evolution as they are way more aware of the current environment. People past 30 years old, that used to buy only albums of their favorite artists time by time, weren’t likely at all to buy an iPod, create an iTunes account and start downloading music. Basically, the iTunes target audience was the same one as Top 40 radio stations target audience.

Looking at the contrapositive, it also means that non-regular buyers weren’t using downloads much. So, if we concluded that downloading stand-alone tracks was the killer of album sales from 2005 to 2012, then it must mean that artists targeting an audience of persons not involved much into the music industry should continue to sell as well as before.

It is difficult to identify clearly albums belonging to this category. One specie remains though, the blockbusters. Those albums are those which got so big that labels promoted them on the biggest avenues, including the most expensive ones where it is usually not commercially viable to promote music records. Those albums will happen one time every 2 or 3 years, topping charts for 3 months or more. To point them out, below graph shows the #1 and #10 seller of each year in the UK since 1997 (left axis), along with the curve of the market evolution (right axis). 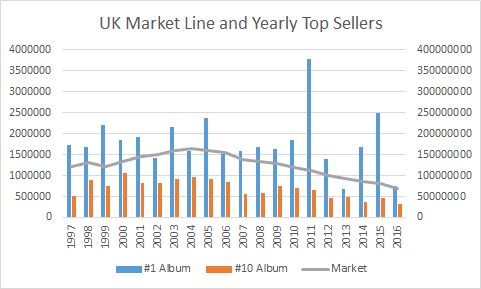 If you look carefully, you can notice the #10 seller of the year went up and down roughly the same way as the market as a whole. In the other side, the #1 seller doesn’t follow this pre-defined path at all. This is precisely the result of some records appealing to consumers that are not part of the usual buyers, which thus do not impact much the overall market. The market size gives a very good indication of the evolution of regular buyers, but it doesn’t help to define the number of potential buyers around.