To explain this first cross-artists fixing campaign I’ll be giving some insights of our work at Chartmasters.org. How do estimate sales figures of all records?

The first step logically consists in estimating main markets. Certifications and charts are already known, the experience on those markets is also big so there is rarely home for doubts or relevant errors. In a second step, formulas are used to extrapolate Worldwide amounts. Then, collecting non standard raw data enables to validate each estimate, the goal is to identify figures communicated here and there to fix holes as much as possible.

Once all main markets estimates are set and formulas are up and running, the World total is available. It is never manually changed, this is just a result of all available information within’ the Excel sheet. The last step is made of challenging final results with official sales figures of the IFPI or labels reports – real ones, not claimed labels figures that aren’t legitimate in reality. When a gap is noticed between a World result and a valid known figure, we do an analysis to identify the root cause – which raw data or formula created the flaw. After identifying which estimate / formula is wrong we fix it. Then we check if this new information implies additional adjustments on other records for the concerned country. This process enables to destroy myths of massive Brazilian or Asian sales for example.

As mentioned we have enough experience and knowledge to avoid relevant errors in known markets. The % of possible error will always be rather small. The real deal is with formulas. With Hernan, we know by mind how the album market evolved in all World areas through the decades.

Physical singles sales is much more of a black box yet. We both expected the Spice Girls to easily cross the 20 million mark in that format. To be transparent, the first file of estimates resulted in 23 million units sold, while the article has them on 18 million. In fact this is the figure EMI communicated in 2000. The issue is that the main markets – US, UK, Germany and France – already had a combined tally of 16,6 million with only very well tracked figures, leaving a very small room for sales elsewhere.

I then went deep digging into various old documents and sources to identify exact singles markets figures, to understand how it was possible for the girls power group sold so few units in other countries. Results were pretty shocking – while various off the radar countries saw their album market explode during the 90s, the exact opposite happened in the Singles format that started disappearing from mid-80s in a lot of countries. It feels like the US collapse in 2000 arrived early since we stopped buying such products only 5 years later in Europe, but tons of countries had got rid of them way before the US. 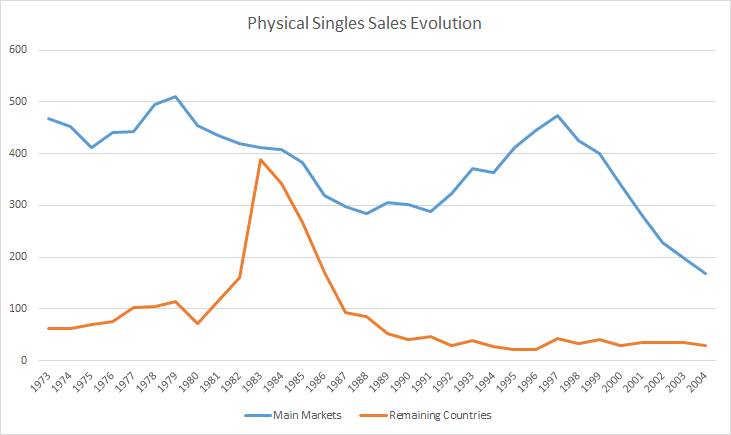 Thanks to this new information, the Excel sheet has been industrialized to extrapolate World sales on the back of main markets estimates not with a fixed ratio, but with an adjusted and precise ratio for each and every year.

The Spice Girls article was published in March 2017, after Whitney Houston and before Mariah Carey, so with old and new methods. This is why formulas gave very different results for the same single in spite of focusing on the same estimates within’ the main markets:

As you can guess, what is true for this single is also true for all remaining ones from this period. During the next weeks, I’ll be fully re-vamping physical singles sales with adjusted methods for all artists who sold well in this format during the 90s. Due to the low share of this format in overall CSPC totals – no artist has more than 16% of his total coming from physical singles – it will not conclude on a final adjustment of more than 2/3%. Our target is accuracy yet so we will be fixing everything and keep you updated with all new figures coming out!

This website uses cookies to improve your experience while you navigate through the website. Out of these cookies, the cookies that are categorized as necessary are stored on your browser as they are as essential for the working of basic functionalities of the website. We also use third-party cookies that help us analyze and understand how you use this website. These cookies will be stored in your browser only with your consent. You also have the option to opt-out of these cookies. But opting out of some of these cookies may have an effect on your browsing experience.
Necessary Always Enabled
Necessary cookies are absolutely essential for the website to function properly. This category only includes cookies that ensures basic functionalities and security features of the website. These cookies do not store any personal information.
SAVE & ACCEPT
wpDiscuz
54
0
Would love your thoughts, please comment.x
()
x
| Reply