It sounds fairly logical to add together weighted sales of one era – studio album, physical singles, downloads, and streams – to get the full picture of an album’s popularity. For older releases though, they also generate sales of various live, music videos and compilation albums.

All those packaging-only records do not create value, they exploit the one originated from the parent studio album of each of its tracks instead. Inevitably, when such compilations are issued this downgrades catalog sales of the original LP. Thus, to perfectly gauge how worthy the original LP is, we need to re-assign sales proportionally to its contribution of all compilations which feature its songs. The following table explains it all. 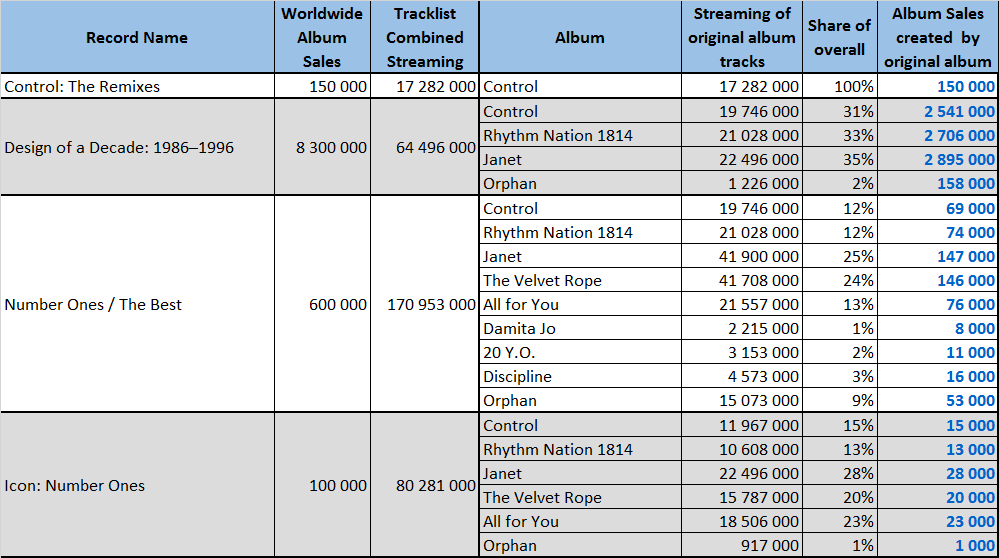 How to understand this table? If you check for example Design of a Decade 1986-1996 compilation album line, those figures mean it sold 8,300,000 units worldwide. The second statistics column means all versions of all songs included on this package add for 64 million streaming plays on Spotify.

The second part on the right of the table shows how many streams are coming from each original album, plus the share it represents on the overall package streams. Thus, streaming figures tell us songs from Control are responsible for 31% of the Design of a Decade 1986-1996 tracklist attractiveness, which means it generated 2,541,000 of its 8,300,000 album sales and so on for the other records.

Design of a Decade is, from a 2017 point of view, a fairly irrelevant compilation as it misses various key hits like Together Again, Got ’til It’s Gone and All For You which released after the compilation came out, but also notable eligible omissions like Any Time, Any Place, If and Again. Nevertheless, its track list is the distribution of sales that matters the most as this is by far Janet Jackson’s biggest selling compilation with 8,3 million units. All three of Control, Rhythm Nation 1814 and Janet. are responsible for a third of its appeal, some 2,7 million-ish sales generated by each.