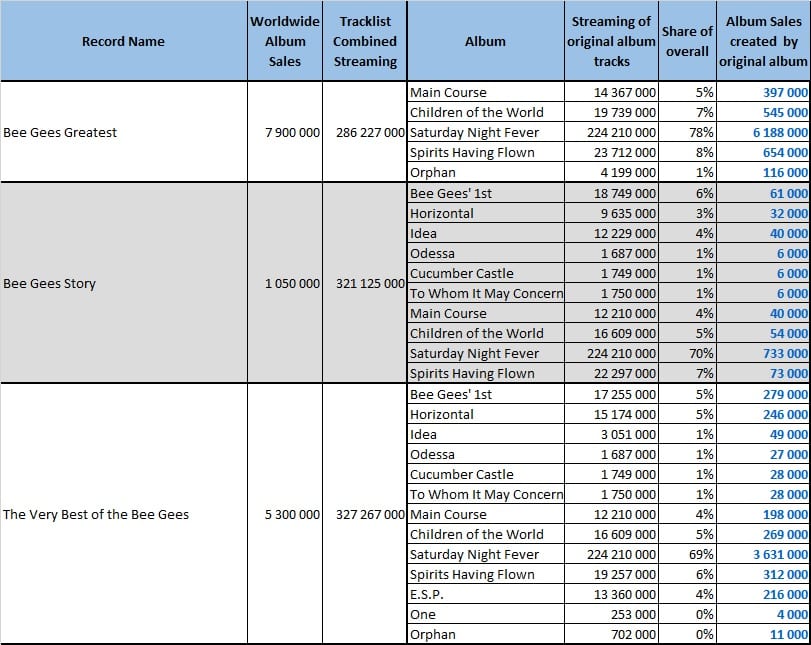 It is impossible to continue doubting of the overwhelming strength of Saturday Night Fever. The Soundtrack is responsible of roughly 70% of each compilation attractiveness that came out after it.

During the Grease study, I pointed out how Saturday Night Fever outsold by various millions Grease during their first year and how Saturday Night Fever hits perform much better on streaming as well. If the Bee Gees led album was bigger upon release and bigger in the long run, it was some kind of anomaly to see that in pure album sales, Grease is now ahead. The reason of that situation was pointed out – the fact that since Grease leading artist was the non-singer John Travolta, no greatest hits type album ever replaced the original soundtrack which thus enjoyed notable catalog sales. On its side, Saturday Night Fever was cannibalized by all Bee Gees compilations that have been sold from as soon as 1979 with Greatest.

The table from this page alone clearly proves this fact. From those three sets only, Saturday Night Fever created more than 10 million sales! This is far from being over as plenty more compilations are yet to come…