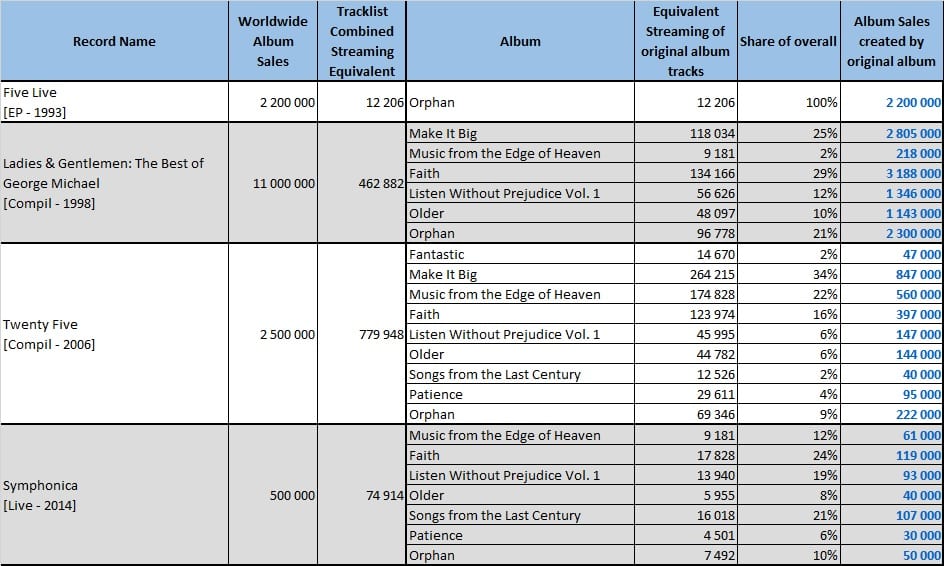 If one checks in detail the pattern of sales generators for those various packages they will not be able to identify a real logic. The reason? Compilations of George Michael are a mess. His discography is a nightmare for a label.

The first Wham! studio album included remixes of its own tracks. The second album had hits from both Wham! but also from George Michael. Their third album included two versions depending on the market, with or without past hits, plus new hits from both acts plus one stand-alone Christmas song. Then came George Michael’s solo discography that was more standard, but the fact his songs’ popularity differ extremely depending on the market, the US or Europe, make tracklist choices impossible. Several of the his biggest hits from his solo career were duets outside of his albums too. Add to that different labels involved and you get the perfect combo to prevent commercials from sleeping.

Still, Ladies & Gentlemen was quite a heavy seller with 11 million units registered. The album left out Wham! songs, indeed both Wake Me Up Before You Go-Go and Last Christmas are missing which explains why Faith ends up being the main sales provider of that package, responsible for 3,2 million of its sales. However, the TwentyFive album does include main Wham! hits resulting in a very different pattern more favorable to the pair albums.