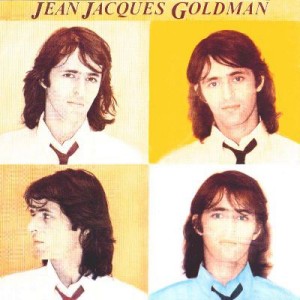 After spending a few years singing English within’ his band Tai Phong, Jean-Jacques Goldman decided to go solo and sing in French instead. A first untitled album came as a result in 1981, latter often referred to as Démodé (translated Unfashionable), the name Goldman had selected but refused by his label.

Music started to be promoted on TV from the end of 1987 when taxes reduction made the business profitable enough to invest that much. What happens with TV is that people get recognized much faster. It is no coincidence that the likes Mylène Farmer, Patricia Kaas or Roch Voisine got so big so fast after that date. Before 1987 though, with only radio airplay to drive album sales, public needed various songs from the same artist before noticing it, first focusing on the song itself. That’s the reason which explains why Francis Cabrel or Renaud sold poorly with their early albums despite issuing strong hits from them.

Jean-Jacques Goldman faced very exactly the same situation. His debut hit was Il Suffira D’un Signe, a song which remains cult to this day. No official chart was existing at the time but this hit made the Top 10 in mid-1982 on most rankings that were still available. It wasn’t enough to support the album of a newcomer though with Démodé stopping its way under 50,000 units during its initial run, never making the unofficial Top 25 Album Chart from that year.