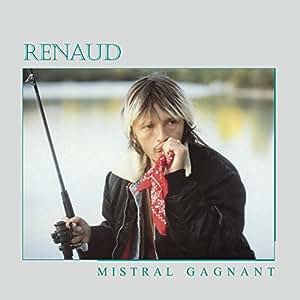 Now a blockbuster seller, Renaud made it again with his 7th album, Mistral Gagnant. It was his first album with Virgin Records, although it changed nothing as far as his success is concerned. With lead single Miss Maggie a solid hit, the album went threw the roof thanks to the most rewarded ballad of all-time in France, Mistral Gagnant. From its November release the album ranked 3-1-2-2-5-7-8-11-16-18 in monthly charts, selling some 800,000 units by the end of 1986.

As the album kept the position of absolute best Renaud record it has been an evergreen seller since.

With the arrival of the CD format, compilations started to emerge more and more for many artists including Renaud. His past label Polydor released two of them dedicated to him, unlike the previous Master Série that was a cross-artist project. Ma Compil’ which contained his biggest 1975-1983 hits was released in 1986 with no promotion, same for Ma Compil’ 2, covering the same period but with overall lower profile hits. If the latter was never certified, the former went Gold in 1987 and 2xGold in 1991.

Obviously the outstanding of his last albums pushed up the entire catalog of the artist. Despite selling only about 125,000 copies in its first year, Ma Gonzesse was certified Platinum, 400,000 units, in 1987. Ironically, recent data proves this is the weakest catalog seller of his discography. In fact, it has the lowest cumulative streaming for his songs (2,2 million), it charts at the lowest position (#329) out of all his studio albums during the gigantic hype of April 2016 around his new album and it is also the only of all his albums not charting in the catalog chart of April 8 2016 despite the unreal 22 entries of the artist. Ma Gonzesse reaching Platinum before his first two albums was mostly due to it being the immediate (and very recent) predecessor of Marche A L’Ombre, the first large selling album of the artist, thus boosting its catalog sales in early 80s. Up to the end of 1987, Renaud estimates stand as below: