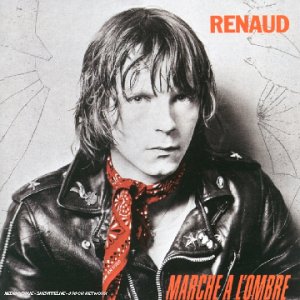 With the title track supporting a famous French movie of the same name, Renaud enjoyed a widespread success with this new record. Released in February 1980, Marche A L’Ombre single shot to the Top 3 while the album went 10-6-16-23 in monthly charts from March to June.

Going Gold shortly after release, the album continued to sell well during more than a year despite the four months only chart run. Songs like Dans Mon HLM and Les Aventures de Gérard Lambert got relevant airplay. This enabled Renaud to register his first Platinum album in 1981 fall, some 400,000 units sold in approximatively 22 months.

In the meantime, as Renaud was now part of the big selling artists, those going over 300,000 units of an album, a live album was poised to be released by his label. His show was rather long, with two distinct parts, the first one covering popular French standards and a second part, longer than the first one, with the artist own songs. Thus, rather than dropping one live album Polydor dropped two. The 2-LP release of Renaud songs was Live A Bobino which never charted from its late 1980 release but still went Gold in mid 1981. The live album of old standards was Le P’tit Bal Du Samedi Soir Et Autres Chansons Réalistes, it was issued in early 1981, charting one month at #16 in May of that year, going also Gold latter in 1981.

With this notable popularity increase, the back catalog of the artist enjoyed a boom. The only album that had yet to be Gold, his debut LP Amoureux De Paname, also went Gold in mid 1981.