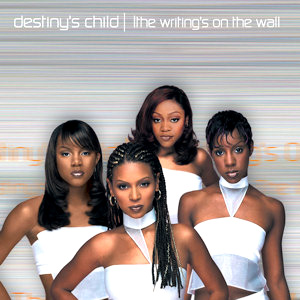 Released in July 1999, The Writing’s On The Wall was going to be part of teenagers life during more than 18 months. Lead single Get On The Bus failed to chart, but the album still debuted at #56 as some urban airplay from past era had started to build their fan base. From that point, the record went on a never ending repeat, going in and out the Top 75 without even going  higher than #32.

It was first Bills, Bills, Bills, #20 hit in December 1999 that helped selling the album. Bug A Boo was less successful, peaking at #57 in March 2000 but still kept The Writing’s On The Wall alive. In May-June, Say My Name became the group first Top 10 hit, peaking at #10 on a solid eight weeks Top 15 run. In September, Jumpin’, Jumpin’ went #41. Independent Women, a new song added to the November 2000 extended edition of the album, became a hit too with a #19 peak and an extensive 27 weeks chart run. As a result, the album featured inside the Top 100 as late as in April 2001.

Never breaking the main audience, it nevertheless sold decent amounts as the market was extremely high at that point. By May 2000, the record went Gold and one year later it reached 2xGold while it was still sitting inside the album chart that got extended to a Top 150 in-between. Both certifications came on large Sony Music audits thus they weren’t date specific. In fact, by late 2001 the album was up to 240,000 copies sold already.