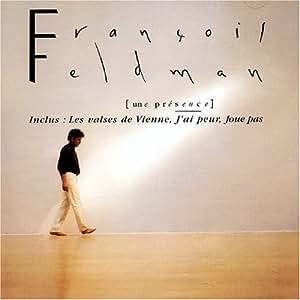 We can hardly argue François Feldman success lasted over years. His last 2004 album peaked at an abysmal #132 position before being released from his contract. It doesn’t prevent Une Présence from having been an incredible success story yet.

Released in October 1989, this happened only a few month after his 1987 debut album finally took off. Une Présence took over incredibly well, debuting at #10. This was achieved thanks to the #2 lead smash, the classic track Joue Pas, a duet with Joniece Jamison. This song missed several weeks at #1 only due to historically successful Kaoma 1,8 million selling smash La Lambada blocking it. The album held firmly inside the Top 15 until the end of the year, selling a calculated 144,000 units and being certified Gold in the process.

Before the end of the year the second single Les Valses de Vienne was launched. It was a strong, six weeks #1 during the first quarter of 1990. During this quarter the album re-peaked several times, ultimately #2, never leaving the Top 5. Each time that a single was ending its way, a new one was taking over.

Third one, C’Est Toi Qui M’As Fait, was a #2 song during the summer. While the album wasn’t as high as earlier in the year, it was still Top 20 during those months. After being pushed down to #33 in September / October due to the standard busy release schedule of this period.

It was still too early to shut down Une Présence yet. Already 2xPlatinum at that point (600,000 units), a fourth single, Petit Frank, was dropped in September. It climbed very slowly but nothing was stopping it in spite of the heavy competition. After 13 weeks, it achieved the very desired #1 spot, a fourth single in a row peaking inside the Top 2. It made the feat with style as the song reached the top just in time for Christmas week and stood there for three weeks. At #33 when the single started to air, four months later the album was up to #3. During the entire first semester of 1991, the record resisted pretty well.

Sales passed the million mark with a Diamond certification being awarded, climbing ultimately to 1,2 million worldwide by mid-1991, this included less than 100,000 units outside France. At that point, the album was out of charts and unlikely to receive additional shipment before some time in 1992 when follow up Magic Boul’Vard was rebounding.

The 1993 album Indigo flopped badly, from there François Feldman popularity completely vanished and never recovered. Although Une Présence is his only album that still have some kind of appeal, it is still a rather bad catalog seller, especially since hits package 1996. At 1,15 million shipped by late 1992 in France, the album is still a long way from reaching 1,3 million by now.