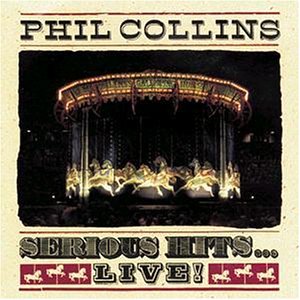 Never ending talks about divas or Michael Jackson vs Elvis Presley stories often overshadow the success of some other artists. Phil Collins is one of them. We tend to forget that during the 80s his albums easily outsold those of Madonna, Prince or U2. In continental Europe his sales were mind-blowing and France was no exception.

This 80s decade of smashes wasn’t summarized by a proper hits package. Instead, a Live compilation was issued in 1990, Serious Hits… Live. During the Christmas season, only gigantic blockbuster Alors Regarde by Patrick Bruel topped this live set, which dominated even Michel Sardou new album.

This success during the busy period enabled it to be certified Platinum (300,000) in 1990 itself. With three months Top 5 and numerous more months Top 50 sales kept growing. Even after dropping out, the release randomly re-entered low Top 50 in March 1992, showing that if charts had been a Top 100 in this period it would have certainly not drop out before at least 1992 fall. In mid-92, the set passed the 2xPlatinum mark, some 600,000 copies sold.

The album remained as consistent as a compilation album, even stronger at times. In 1996, it returned charts in great fashion by peaking at an impressive #4. Those results sent the album over the million mark, receiving a Diamond award in the second half of that year.